After all the bashing I do at China's expense, one would think that there was nothing good about the place. It's poor, communist, censors its interwebs, and eats anything that moves. A lot of our stuff comes from China, so maybe we have no right to complain. Tofu is awesome, too.

Also, China invented silk. Since some of us are allergic to wool and nylon took a few centuries to invent, we should be eternally grateful that cute little caterpillars make soft nests for themselves while they metamorphose. Then we're rude enough to interrupt them while they're changing.

Silk is created by a fully captive-bred moth called Bombyx mori, or the domesticated silkmoth. About 5,000 years ago, people in China figured out that the cocoons of certain moths (specifiaclly Bombyx mandarina) could be woven into thread just like sheep wool. After presumably figuring out how moths reproduced, the little bugs were domesticated to hell and back.

Silk has been around in China since at least the 27th century B.C. Legend has it that silk was discovered when a silkworm cocoon dropped into the teacup of Lei Zu, the wife of the Yellow Emperor. After figuring out that the thread could be woven and a larva was making it, the Chinese began cultivating the little worms to be extra-fertile and have soft, plushy cocoons. The Chinese guarded the little maggots well until the 500's A.D. when a Byzantine missionary smuggled a few out. Whoops. 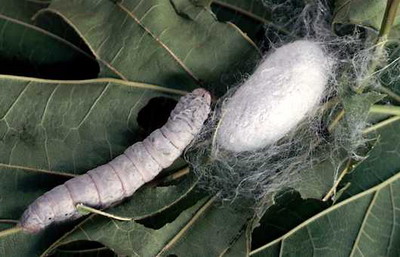 The silkworm is the most genetically altered domesticated animal. Domesticated silkworms make cows look competent. A cow, if turned loose, can still become feral if it is not executed for being a still-living hamburger. These silkworms are so bred down that the adult moths cannot fly. (A certain artist has succeeded in bringing back their wings, but her spot will be after the (book) Dr. Moreau.) The most they can do is breed with their extant relatives into strange hybrid moths. Otherwise, they are entirely dependent on humans for survival. 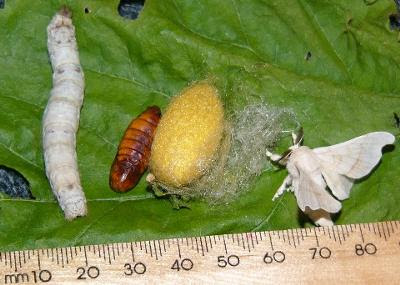 Besides China, silkworm breeding has also taken wing (ha ha) in South Africa. The silkworms there are hardier than the Chinese silkworms because they are treated as pets. The exposure to different conditions make them welcome additions to the silkworm gene pool, which can be decimated by disease at any given time. There are over 400 strains of silkworms, however, and science is always creating more. There will always be plenty of cocoons for everybody...except the worms, of course.
Posted by KuroKarasu at 11:24 PM