Looking at the pterosaur poster in my room, I say to myself "man, there need to be more monsters made out of these." Seriously, with the skulls pterosaurs have, one could make a whole new legion of Hell. We've already covered a few with interesting crests like Nyctosaurus and Tapejara, but the bills of some pterosaurs are worth a look, too.

Along with weird crests, a lot of pterosaurs had weird teeth. Several species had teeth at the end of their long bills. One had teeth that seriously looked like long combs. Basically, they made mergansers, the 'toothy' gangsta punks of the duck world, drop their spray cans and hide.

Which brings us to this:

That skull belongs to Pterodaustro ("southern wing"). Pterodaustro was a pterosaur discovered in 1969 in Argentina. It lived in the Cretaceous a little bit earlier than less-freakish pterosaurs like Pterandon and cool dinosaurs like Tyrannosaurus rex and Velociraptor. It survives today only as an example of one of the freakiest pterosaurs ever.

Let's start with the obvious: The bill of Pterodaustro was lined with thousands of slender, long teeth. It is hypothesized that these were used for filter feeding, much like modern day flamingos. A single Pterodaustro would have consumed thousands of these tiny organisms in a single scoop. Fossils of such tiny creatures have been observed around Pterodaustro, so this flamingo parallel is not from the beak alone. The resemblance is uncanny; remember that birds and pterosaurs aren't even closely related. 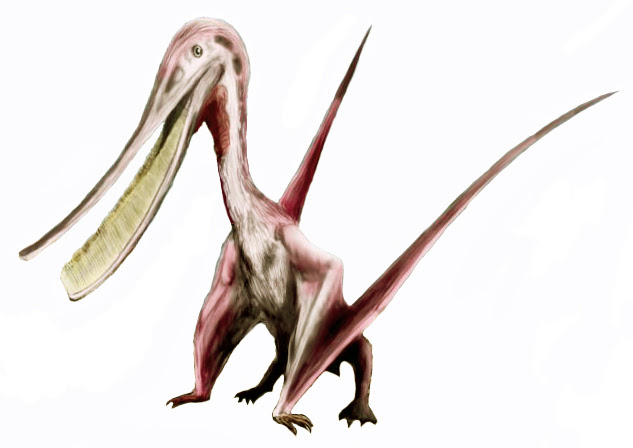 Speaking of flamingos, by the way, Pterodaustro may well have been pink. It's unknown how pterosaur pigments worked, but this one shared a diet with flamingos. Flamingos get their bright colors from eating a lot of crustaceans. In the worst-case scenario, its fur may have been black on bright pink skin. Yes, your worst nightmares now come in pink.
Posted by KuroKarasu at 8:50 PM