Just when you thought cave animals could not get any weirder, this happens: 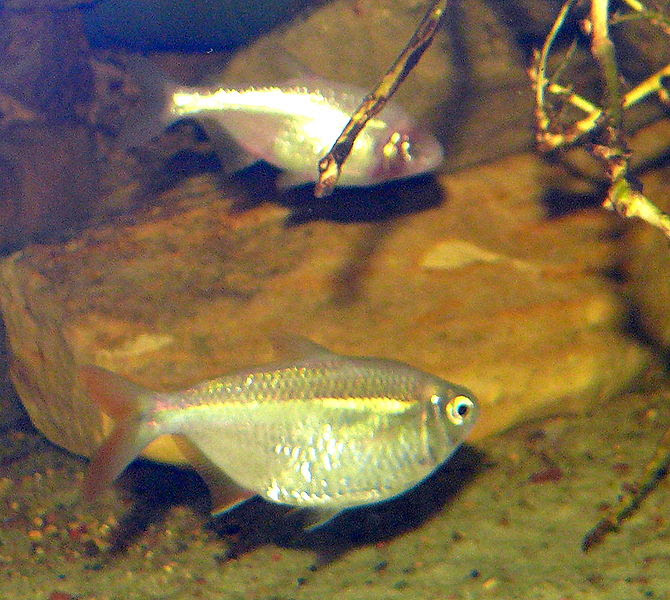 Those are both the same species of fish, the Mexican tetra (Astyanax mexicanus). It ranges from the Rio Grande in Texas to Central Mexico, both in caves and in surface rivers. The main (but not only) difference between them is simple: One has eyes and one does not.

The eyed and eyeless Mexican tetras have several differences. While the Mexican tetra's surface form looks like, well, a normal silvery fish, the cave form is albino, almost see-through, and, most obviously, eyeless. On the slightly less noticeable side of things, cave tetras store more energy as fat and have much better senses of smell and hearing than their sunlight-dwelling brethren. If you want to see how stuff that evolved in caves is different from its counterpart on the surface world, Mexican tetras are a great place to start.

When the blind specimens are born, they have eyes. As the fish grows, opaque skin grows over the eyes, rendering the fish completely blind. The eyes themselves also degenerate as the fish grows older. The coding for eyes is there, it just gets overridden as the fish matures. Nobody knows precisely why, but theories such as protein conservation and sheer dumb luck have both been tossed around.

The exotic pet trade loves these fish, particularly the blind ones. They recommend putting natural rocks into the tank and keeping them in semi-aggressive schools. The appeal is obvious: pet hobbyists, regardless of what sort, like different things.  It's hard to get more different than a blind fish with a see-through body.

Creationists also love picking on this fish as evidence against evolution. Without factoring in the extensive adaptations this fish has made to cave life, it seems weird that an animal would develop eyes, then suddenly lose them. Clearly they are not familiar with the sheer amount of junk traits humans have retained over time, like our ill-adjustment to something as basic as being bipedal.
Posted by KuroKarasu at 11:05 PM