If fireflies and mushrooms are not your cup of tea and you still want to see something glow in the dark on land, look no further than the caves in Dismals Canyon, Alabama. The caves there are chock full of glowing worms called dismalites (Orfelia fultoni). They are related to the Arachnocampa of New Zealand. They make the inside of a cave look covered in cyan stars. 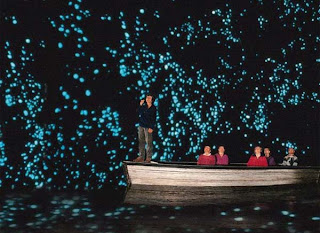 Beware, looks are deceiving! That light show looks like a starry sky for many invertebrates flying into the cave, too. The glowing spots are just a trap to lure in tasty moths, larger flies, and other creepy crawlies, including mosquitoes. The glowly spots conceal an intricate web of mucous strings that works almost like a spiderweb, snatching prey in mid-air. Although we may be big enough to avoid getting caught in the web, other insects are not so bright and get stuck in the sticky strands. The larvae then feed on the helpless bugs to their hearts' content. If other bugs are not available, they resort to eating their own pupae.

These enchanting, yet vicious, little glow-worms are members of the family Diptera, which also contains the ever-popular fruit flies and garbage-eating houseflies. The adult form of these glowing larvae is a type of fungus gnat. They stay a long time in their larval form, however - if Arachnocampa are any indication, anywhere from 6 months to a year, which is like eons to a fly. Beelzebub would be so proud to see humans ogling his not-as-repulsive familiars.

As one may have suspected, there are a lot of larvae up there. This is an immense gathering of flies that just so happens to look attractive to us humans. They need very specific conditions to gather in such numbers. Along with keeping cave water clean for human use, let's preserve cave ecosystems to keep the second starry sky alive.
Posted by KuroKarasu at 11:36 PM