(Apologies: I went to take a nap and wound up sleeping longer than intended. Come hither, Hell Week...)

Remember when I mentioned that cave creatures had a strange aesthetic to them? Well, to be more specific, creatures that spend their lives exclusively in caves tend to have a few features in common.  These include pale skin, poor or absent eyesight, reduced size, and enhanced senses of hearing, touch, and smell. In human terms, 3/4 isn't bad, nerds.

Enter the Kentucky and Alabama cave shrimp (Palaemonias). They are both native to the Southwestern U.S. as their names imply. Yes, apparently the South has a lot of neat cave life. They eat anything that washes into the sediments underground. (FYI: Since several kinds of shrimp do in fact eat dirt like this, they are probably not the healthiest seafood in the world.) As the picture above demonstrates, they are smaller than a penny.

Cave shrimp are a prime example of what happens to 'normal' animals once they adapt to cave life. These shrimp are not just blind - they're completely eyeless. They're pure white with translucent skin. If they ever left the safety of the caves, they would die in a heartbeat. Even as they are, they have predators in other cave creatures such as salamanders, raccoons, and equally-blind cave crayfish (a case of the blind eating the blind). 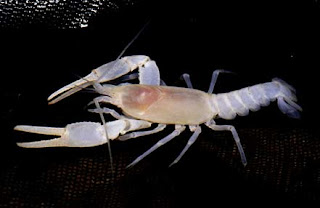 Yes, crayfish live in the caves, too. There are several species (Cambarus pecki in Alabama; Procambarus elsewhere), several of which live in Florida and all of which are endangered. They look a lot like cave shrimp, only bigger, nastier, and with pincers. Like the shrimp, their skin is so light you can see through it - who needs melanin when you live in depths in which nothing can see? It's amazing; we could have saved so much mess in biology if some smart soul had bred translucent crayfish for us to study.

Both species of cave shrimp and all cave crayfish are endangered. The main cause for this classification is poisoned groundwater. As we've said before, freshwater ecosystems are fragile. So are species that are highly adapted to one environment. Cave shrimp will probably not be around much longer, so enjoy them while you can.
Posted by KuroKarasu at 8:52 PM