Bio-Art: Inside of A Dog.

For those of you who have not been keeping up with my entries, especially during Freak Weeks, I am not a dog person. This doesn't mean that I haven't looked into them as animals  - far from it. When I found a book called Inside of a Dog: What Dogs See, Smell, and Know by Alexandra Horowitz, I got it. Not a bad deal for 6 bucks, to say the least, even though I've never had a dog. 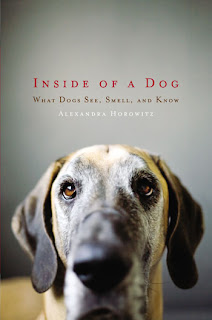 So now you're probably wondering: Why would I investigate a book called Inside of a Dog? The simple answer is that I like looking at things from different angles. Animal behavior is fascinating; it reminds us that, hey, other animals besides humans have lives, perceptions, and so forth. Plus, in case I ever do get a dog, I want to know what makes the most bizarre non-human animal in the world tick.  Doubtless some dog owners wonder this as well.

Inside of a Dog:What Dogs See, Smell, and Know, is not some gross book about canine anatomy. Rather, it's about the canine mind. What does a canine smile mean? What do barks, and the different kinds of barks, really mean? Do dogs see humans as another species, or as other dogs?  These are all fascinating questions that go all-but-unanswered by serious scientific studies. Inside of A Dog compiles nearly every study done on canine behavior, and then some, into a comprehensible format.

The book proposes to immerse us so thoroughly into a dog's mind that "we become honorary dogs ourselves." It does this by highlighting both scientific experiments upon dog psychology and the author's personal observations of her own dog, Pumpernickel. She watched tapes upon tapes of dogs playing to observe every nuance in their behavior. Her desire was to see into a dog's umwelt - a sort of private world that dogs can only experience because they're dogs. Seriously, we, with our pathetic noses, have no idea how much information is being exchanged when one dog sniffs another's butt.

Sound like a lot to take in? Don't worry. For the most part, the book is accessible. That's the real key to its success: It speaks to the layman without being at all condescending.  The dog's inner world is brought to light in regular, human terms, such as comparing the dog's mind to stages of human development. All scientific jargon is explained.

Despite not being a dog person, I do agree with the book on at least one count: the author's whole thesis works around breaking the strange anthropomorphy that people have with dogs. Dogs have their own umwelten; they see their world completely differently from humans, especially in regards to smell. If you want to understand dogs as something more than "low-class people," buy Inside of a Dog right now. Or heck, Christmas is coming; go ahead and get it for the literate dog lover in your life. Sit. Stay. Read.
Posted by KuroKarasu at 8:03 PM