You knewJapan was going to make it on here. Somehow, somewhere, the oceans around Japan, AKA the Weirdness Archipelago, would turn up a mollusc so weird that this blog would have to cover it. Remember, the Japanese culture eats everything it possibly can from the sea; weird is on the menu. One could not expect, however, that Japan would be weird enough to yield baby eldritch overlords. 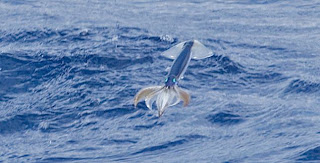 Baby Cthulhu, AKA the Japanese/Pacific Flying Squid (Todarodes pacificus), is exactly what it says on the label: A squid native to the Pacific Ocean around Japan down to Vietnam that, of all things, flies. All squid are predatory, so if you happen to see one of these hovering above you, your brains may not be safe. Squid have never been known to eat human organs, but there's always a first time.

Now, like many "flying" animals, flying squid do not actually fly. The extended fins on their mantles are not capable of powered flight. They can glide up to 50 meters to avoid predators; while not impressive compared to arboreal creatures, that's still pretty far for whatever was trying to eat the squid. They also glide looking backwards, a feat that mammals and fish have only thought of in their wildest dreams. Wildest, stoned dreams.

They are, however, jet-powered gliders. The squid gets in the air via the same mechanic that it shoots out ink: jet propulsion. These squid simply get the eff out of the area instead of shooting ink. While this squid may not actually be able to fly, it's closer than most gliding animals simply by having a built-in engine. Rocky the flying squirrel doesn't count.

Worry not. These are small squid that are easily confused for flying fish. They only fly to escape...as far as we know. The cephalopod apocalypse is not near, but if we see bigger squid flying? Godzilla might be necessary. Also, get all the sushi chefs on this, pronto.
Posted by KuroKarasu at 11:06 PM