Have you ever realized how many things about Christmas just don't add up? Who would really put presents under an evergreen tree? Who gave a fat old man the right to enter houses in the presence of kids, anyways?Why do we have Christmas trees?

Well, there's a perfectly logical explanation for all of this:

Yep: Stoner mushrooms. In this case, the specific mushroom in question is Amanita muscaria. They are native to most places in the northen hemisphere, particularly in areas with pine trees. A fair amount of X-mas loops back to these mushrooms. Jesus was never involved in Christmas; the makers of the calendar just decided to celebrate it around the day the pagans were celebrating solstice. It was a marketing move to sync Jesus with 'shrooms, in other words.

Amanita muscaria is also called "fly agaric." The reasons for this are rather strange, but the most common is that one could sprinkle some of the mushroom in milk to ward off flies.We can't tell exactly where this practice originated (possibly Germany or Sweden), but it's strange. Flies can actually get high just by landing on the caps of Amanita muscaria.  Just another reason to pick up mushrooms.

Its most notorious use, however, is as a potent hallucinogen. The culprit is muscimol, with ibotenic acid helping it along. The effects are so varied that it would be madness to say that there are any standards beyond "tripping the eff out." Symptoms usually wear off after 24 hours. Severe poisoning only occurs after 15 caps or so; nobody has gone on record dying from these. When other types of hallucinogenic mushrooms get banned, Amanita suddenly becomes popular. Get on your cloaks and start flipping tree skirts! 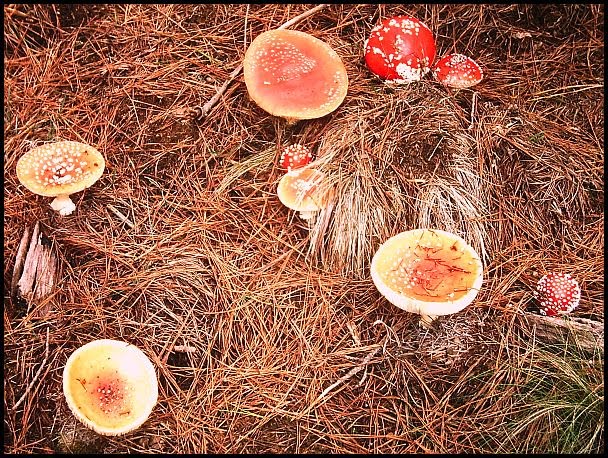 So, how does this tie in with Christmas? Amanita muscaria mushrooms are commonly found beneath fir and evergreen trees. Replace "mushrooms" with "gifts." Link it with the solstice for good measure. Boom, Christmas.

Oh, and guess what else likes Amanita mushrooms? Reindeer. Yes, they also get high off of the 'shrooms, causing them to leap about like giddy idiots - that's the origin of flying reindeer. Other possible origins include the flying sensation and hallucinations (sometimes of winged reindeer) brought about by the mushroom.  People can also get high off of the remaining active toxins in reindeer (or human) urine, which is actually safer than taking the mushrooms straight. Yes, I just said that drinking reindeer piss is safer than eating a mushroom off of the ground. (That said, A. muscaria are edible with proper cooking.)

After this, things start to get a little hazy.  We aren't sure whether Santa has any real shamanic basis or not. It is, however, awfully suspicious that St. Nicholas is usually pictured with A. muscaria colors, that he laughs oddly, and that his Coca-Cola-designed image is almost too flushed to be sober. A fluffy coat like that also seems like a good idea when mushroom-hunting in the winter, although whether it's really red and white could be debated. Use a critical eye when browsing these theories.

Of course, A. muscaria's fame extends well beyond Christmas. All of the mushrooms in Mario-land look like Amanita. Pokemon also makes some use of them, with "Amanita" being the name of the storage system manager in B/W and the two new mushroom Pokemon slightly resembling red Amanita. There was also a dancing mushroom sequence in Fantasia, which speaks for itself. 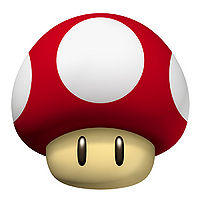 Merry Christmas to all, and to all a stoned night! It's traditional! (Actually, I DID get a mushroom garden for Christmas...)
Posted by KuroKarasu at 9:00 PM