"They Actually Eat That:" Ass.

Sometimes, something makes it onto this column because it is gross. Still other times, it is simply our narrow definition of "food" in the United States that makes something qualify for this list. Today's dish definitely falls under the last category: "Why aren't we eating this, again?" 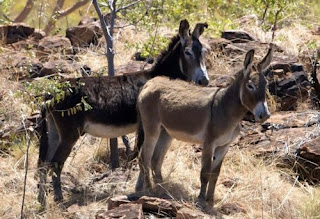 Donkeys are like funny-looking horses: long ears, long face, funny teeth, shorter legs. We laugh at donkeys. They are, for all intents and purposes, solid beasts of burden and a "poor man's horse." The donkey doesn't have the same majesty as a horse...but not many people in the States would consider it meat, either. 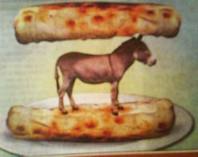 Well, yeah. Donkeys are around. Why not eat them? China has been enjoying it for over 300 years; donkey meat is fairly popular in Europe; if people have donkeys, they have probably found a way to eat donkeys. It just kinda happens when you're another species hanging out with humanity.

The thing is, Equus asinus is not usually considered food in the U.S. of A. Unlike with horses, it's not that most Americans would have an objection to eating donkey- it's simply that we haven't thought of that because our cultural definition of food is pretty narrow. Donkey meat tends to cause a scandal, over here.

That said, the cultures that do handle donkey meat handle it much like other meats. There is a sadistic donkey recipe in China, but it's so mind-bogglingly simple that it's barely a recipe. Tie a donkey down and eat it. Easy enough. No animal is safe in China, silly ass. Several other places enjoy donkey meat as well, but it's really common in China. It's literally subway snack stand common.

So, if you haven't tried donkey meat, give it a shot. It's rich in iron, calcium, and phosphates, along with being leaner than most store meats because donkeys eat grass. It is probably better for you than most meats on the market.  If it makes you feel any better, pretend that the meat before you is a certain talking donkey that won't shut up about parfaits and waffles. You know the one. You're welcome.
Posted by KuroKarasu at 11:59 PM