While I was in San Antonio, a strange, white fish with a horn caught my attention in the Rainforest Cafe's fish tank. I posted a pic of it on my Twitter; no luck with identifiication. A month later, in Houston, I finally got a name for it: unicorn tang. No, Rarity from My Little Pony is not sponsoring the orange juice of astronauts, although that would be funny. 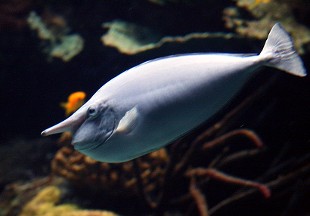 The unicorn tang (Naso unicornis) is a surgeonfish sporting a single strange horn above its nose.  It is native to most warm, tropical waters, including those around Hawaii and Polynesia. It is a herbivore, feeding on algae.It may also pick on bits of meat in captivity.

There are a few types of unicorn tang, but they all have one thing in common: a horn above their noses. The horn starts growing when the tang hits the six inch mark (in N. unicornus). It breaks off against coral and nets. Nobody knows what this horn is used for. We do, however, know that it doesn't heal the sick like the horn of a 'real' unicorn.

Perhaps more impressive, than the horn are the hidden spikes above the fish's tail. Each unicorn tang has two sets of these blades, making them double trouble if mishandled. These tail blades are used for defending themselves and protecting their territory. This unicorn packs a kick, and it doesn't even have legs.

Unicorn tangs are uncommon in the exotic pet trade. They need at least 180 gallons, if not more, to be comfortable. This big fish maxes out around 2 feet, making it unsuitable for most home tanks. Unicorn tangs are considered peaceful most of the time, but can be aggressive with other tangs. There are currently regulations on catching unicorn fish; This does not stop people from doing it. Ask where your aquarium specialist got his fish on, please.
Posted by KuroKarasu at 11:04 PM