They Actually Eat That: Herring in Sour Cream.

We do not have many traditional foods at Christmas in my household. This is largely due to my own dislike of Polish (we can't get czarnina) and Nordic foods (that aren't awesome cookies). This time, there was a little bit of a lapse, and something odd made its way to the table for a bit of nostalgia on my mom's part: pickled herrings in sour cream. 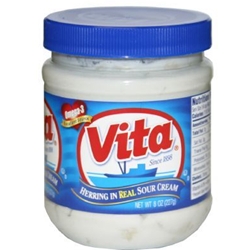 Anybody with an appetite can probably tell why this thing wound up on "They Actually Eat That" from the name alone. Herring and dill might not sound too bad together, but throwing it in sour cream and stuffing it in the fridge has a certain degree of chilling nastiness lurking beneath it. So, why do people eat it aside from it being a clearly acquired taste? Let's find out!

Pickled herring is fairly common throughout Europe. In Nordic countries, however, they go insane with preserving things. Pickled herring in sour cream is just one of the ways they go a little overboard with preserved fish. It is frequently eaten around Christmastime. Dear gods, this is already sounding on par with lutefisk.

Having not tried this thing, I cannot give an accurate description of how it tastes or its texture. The general descriptions are disgusting enough to deter me.  I can imagine it tasting like fish, cream, and dill pickles, but most written descriptions sound way worse. The texture of it is something like meat, but not, cold, springy, and generally unpleasant. If you must eat herring, try it another way.

And no, I did not actually eat that. This was one I passed on simply because of a first impression. Even after that, my dad said it was strange. One critic called it "the most fucking disgusting shit I have ever eaten." I am willing to take her word for it. Go cut down a tree with the herrings instead of doing this with them.
Posted by KuroKarasu at 11:07 PM

Email ThisBlogThis!Share to TwitterShare to FacebookShare to Pinterest
Labels: europe, finland, sweden, They Actually Eat That