Anybody who has been paying attention to my writing (ANY of my writing) will know that I, as a person, am a HUGE fan of crossing the human-animal barrier. Scientific gene splicing excites me, if only for the vain hope that I might one day get reptilian scales, bioluminescence, or wings of my very own. Alas, there would be a very dark side to such a contract, even though such advances are inevitable.

Just what would happen if science created another sentient, not-quite-human animal? How would the public take it? The issue of genetic engineering in general is taken to an extreme in Splice, the 2009 movie directed by Vincenzo Natali. 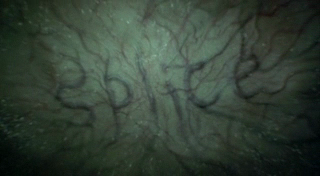 For starters, the opening credits are awesome. The names are made of and put on various biological media, such as veins and snakeskin. We do not even know what we are seeing until the two 'splicing superstars,' Clive and Elsa, take it out of the artificial womb. We just know it's gonna be creepy as all hell from the opening alone.

We are not exposed to the film's cover monster at first. Instead, we spend a lot of time with the animate, genetically-enhanced turds named Fred and Ginger. Despite all appearances, Fred and Ginger are very valuable. They are organisms designed for the sole purpose of engineering drugs for use in livestock.

Fred and Ginger are only the first step in this drug-producing project. The two splicers eventually want to incorporate human DNA into the template to address any number of species-specific diseases. (They only cover the genetically-linked ones, such as Parkinson's and cancer - the usual suspects, as it were - but really, right now pigs and rats make most of our medicine.) Adding human genes to Ginger and Fred would indeed be the "medical breakthrough of the century."

Unfortunately, the bigger company only wants the special genes in Fred and Ginger. As one of the board members rightfully points out, politicians would tear anything involving human DNA to pieces (even though science has gone there already with rabbit and cow chimeras - lab-only, mind). Clive and Elsa have their department compromised until they can isolate the single protein that will rake in the dough. 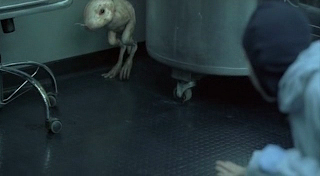 So the two splicers go "screw you" and make a human-animal hybrid anyways. Elsa even goes the extra mile and creates a viable hybrid being as opposed to just DNA in a vat. The fetus grows faster than expected, meaning that, just as the two splicers are having an intimate moment, the cloning machine goes crazy with the weight of the growing fetus. The movie then proceeds to show exactly how bad things get with this hybrid baby, including monster sex with both parents. Yes, both parents.

The premise of the movie, as per a quote from the director, is "the way science is catching up with much of the fiction out there." This is so very true, but I wish it had been more embedded into the setting. We had several points at which the impact of genetically-modified organisms in general could have been discussed, or at least highlighted. You thought splicing human DNA into something was bad? There are people who object very strongly to GMO corn, and that's just a plasmid gene swap for pest resistance.

Science does not see eye-to-eye with ethics. A human hybrid would indeed be just as controversial as the big bosses said it would be. The cow-human and chimeras are under the restriction that they must be destroyed after a few weeks. I can guarantee that, in the near future, someone, somewhere will break that rule and carry a hybrid baby to term.  "If God didn't want us to explore his domain, why did he give us the map?" is indeed the condensed version of science as a whole.

Although it was clearly written with 'science gone wrong' in mind, many aspects of Splice are just weird for the sake of weird. There was no need for the sex change or some of Dren's stranger attributes (the stinger, for example). Although Fred and Ginger were meant to be more utilitarian than aesthetically-appealing, was there no better way to represent that than with disembodied cocks? A lot of it is just strange because. These guys are supposed to be splicing superstars. You'd think they would know how to make something look pretty as well as scientific.

Some of Splice does not even feel like a science project. Once we figure out that Elsa used her own DNA in Dren, it becomes more of a parenting allegory than a story about science gone wild. Look closely during Dren's birthing scene and one notices that Elsa is never shown from the waist down, experiences severe pain, and is really out-of-it by the whole ordeal. Still, human babies are more mortifying than anything they could have spliced, so Dren was the better move.

Speaking of Dren, the monster is more compelling a character than either of the two scientists for most of the movie. We see her grow, realize that she herself is not human, and develop her own extra-specific feelings for her parents. When she's strapped to the surgery table, we feel sorry for her, even though she just attacked a cat and her biological mother. There's also a sliiiight hint of eugenics peeking through when we learn that Elsa has insanity in her family... 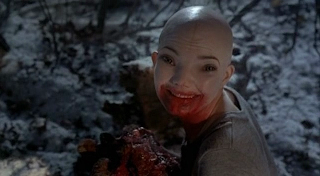 Since human-animal hybrids are inevitable (let's be honest, guys), we will eventually have to think up guidelines for how to treat them. Humanity has not had to deal with a non-human sentient life form in recent history. (This is not counting Neanderthals - those are prehistoric.) Furries, keep watching - you will be subject to EXTREME scrutiny if you ever get your wishes.

Splice is very squicky and definitely not for the faint of heart (it's rated R for a reason), but if you're a fan of seeing science at its worst, give it a try. It does make its point beneath all of the layers and oversights. I am not an advocate of anvillicious writing, but it would not have hurt to show how gene splicing is becoming more and more of a real issue. It's in our meat, it's in our veggies, it's in our drugs, and we don't know what it's doing to us. Splice is a look at the inevitable future of such research.
Posted by KuroKarasu at 9:46 PM