Ah, time for the hardest part of Freak Week: that one last entry to round it all out. Since last Freak Week, I have found a lot of breeds that would have made for interesting entries. The two candidates for today's entry were another cow and a certain very precious type of cat.

That said, have a kitten snapped with my own camera: 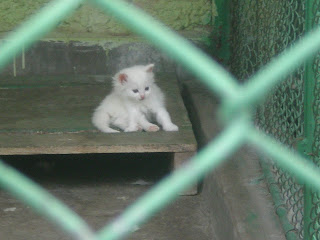 Before you gasp at how inhumane it is to put a cat in a cage like that, that little white kitten is very special. He and his cagemates are pure white, and considered precious and rare enough that the Ankara Zoo has a breeding program just to keep the cats alive. If the name "Ankara" was not enough of an indication, yes, that little fuzzball will one day become an elegant Turkish Angora cat. 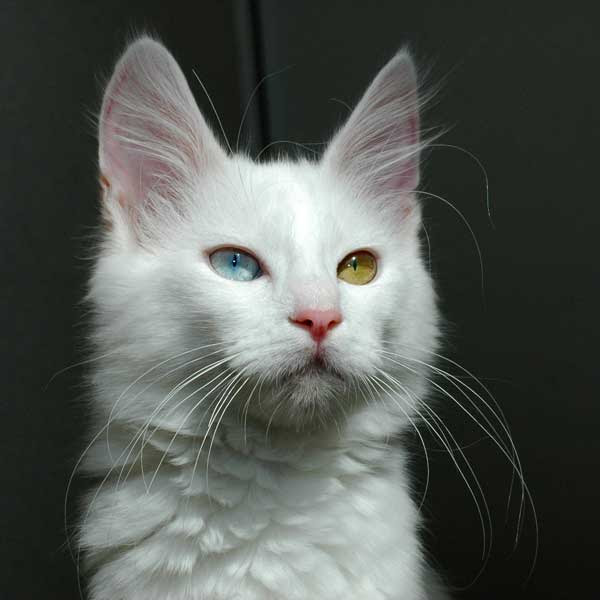 The Turkish Angora was developed in central Turkey sometime between the 14th and 16th centuries. This cat is most known for its long, silky coat and plumed tail. It was bred with Persians (those longhair cats that look like they have run face-first into brick walls) to the point where the breed almost died out. They were recognized as an official breed in 1973.

Although Angora cats can come in almost any color, for a long time, only the pure white Angora was showable. If you have been keeping up with my 'white animal' entries, the usual drawbacks to being white include deafness, impaired vision, or both. Some Angora cats are deaf; in cats with heterochromatic eyes, only the side with the blue eye will be deaf. Many Angora cats can hear just fine, and even deaf Angoras can lead perfectly normal indoor cat lives. (The same CANNOT be said of Dalmatians, by the way.)

The Turkish LOVE their Angora cats. White cats like the kitten at the zoo have been considered a national treasure by the Turkish government since the 20th century. Especially prized are those cats with one blue eye and one eye of another color. All over Ankara, there are giant statues of furries Angora cats, all white with odd eyes. Even the logo for Ankara exemplifies its unique cats.

Posted by KuroKarasu at 9:27 PM