Heeeey! Guess what time it is? Freak Week III time! That means we're going to be looking at vicious, strange animals made not by nature, but by...MAN! Yes, Freak Weeks are all about the crazy breeds made by humans. They are usually inbred as all get-out for traits not normally found in their wild counterparts, so yes, all breeds are freaks by definition.

What better way to kick off this week than with a look at a movie titled The Breed? True to the title, The Breed centers around a special breed of dog selected for aggressive behavior, not to mention being genetically-enhanced. The project is soon abandoned by the military, leaving the island desolate and the dogs running wild.

Some time later, a group of college students decide to crash on the island for a few days. No sooner are they all settled in when a vicious, angry beast attacks them... 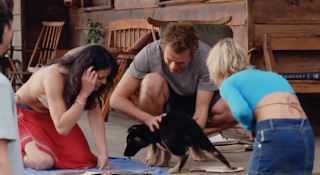 ...AWWWWWW! At least, that's the general response from the college students until the puppy's pack members find it and shit hits the fan. The rest of the movie is the college students running from the dogs, which are honestly way smarter than even a wolf pack would be. We're talking dolphin-level smart. Either that, or the humans were bigger idiots than I first thought. 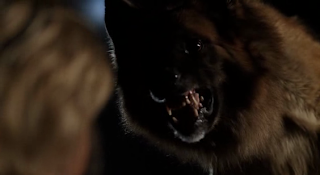 According to the director, the point of The Breed was to make the audience see dogs in a new way. One could argue that Cujo had already done that. The point of both was to make something familiar and normally docile, Canis lupus familiaris, into a terrifying monster even worse than the wolf. Since mythology had been doing this for centuries, I was keen on seeing a modern take.

The dogs in The Breed look like one would expect aggressive dogs to look: Pointed ears, big, not fond of being held, and no flashy piebaldism. The vet-to-be confused one of the feral puppies for a large German Shepherd. Some of them almost looked like African Wild Dogs at first. They all looked like dogs bred for kicking ass and eating it, too, even if they were a little variable for one breed. Kudos to whomever picked the attack dogs for the movie!

To demonstrate exactly how much the dog has been bred down, several people have bred wolfdogs. Add the smallest drop of wolf into a doggie gene pool and dogs start to go crazy. They howl. They become more intelligent. They are more curious, and thus more destructive. Overall, they are not predictable. The Breed made its point: All it takes is one breeder (or animal abuser) to bring back the wolf in the domestic dog. If only college life was not in the way!

Just because it struck me as passably interesting does not mean it was a good movie. The writing in this thing is terrible. Seeing college students being college students while killer dogs are roaming an abandoned island does not make a good movie. (Maybe that's me; I have ZERO sympathy for college students whose sole aim in life is to get wasted and laid.) It still manages to make its point, especially since someone did get injured while making the film. Cujo probably does it better. Watch it for kicks - nothing more, nothing less. I would love to see Film Brain tear this apart.
Posted by KuroKarasu at 11:04 PM