Has anyone else ever noticed the strange double standard going on between lizards and snakes? Bring a snake into a room, and people will run away screaming. Bring a lizard into the room, and people might actually pet it. Sure, there are some people who hate both, but lizards are generally more accepted than snakes...even though chameleons are the embodiments of Satan in Madagascar and there is a gecko called "satanic."

This is not that gecko. It is, however, one of the cutest lizards in existence.

The New Caledonian Crested Gecko (Rhacodactylus ciliatus) is native to, umm, New Caledonia, a group of French-speaking islands off the coast of Australia. They are small lizards that get only slightly bigger than a human hand when fully grown. As per their name, they have a crest that runs across their large eyes and down their backs. They are nocturnal; some owners have even noticed their pets getting brighter colors at night. Unlike most geckos, which are carnivores, cresties are omnivorous - a trait that pet keepers have been keen to take advantage of.

Like several other sorts of geckos, cresties have special pads on their toes and tails that let them 'stick' to almost any surface. These areas are covered with smalls hairs called setae. Through van der Waals bonds, the same type of bonding that binds chlorine molecules together, the gecko can scale any surface. Just in case, it also has small claws to help it grab on to any gaps. This is not quite unique to the crestie, but still fascinating.

What is truly weird about these geckos is that, until 1994, they were thought extinct. Then, suddenly, several of them were found after a tropical storm. We guess that whatever power that is has a weakness for cute lizards. Of all things, the biggest threat to these geckos is an introduced species of ant. (That bugger is really worth an entry in itself.) How's that for a braintwist? 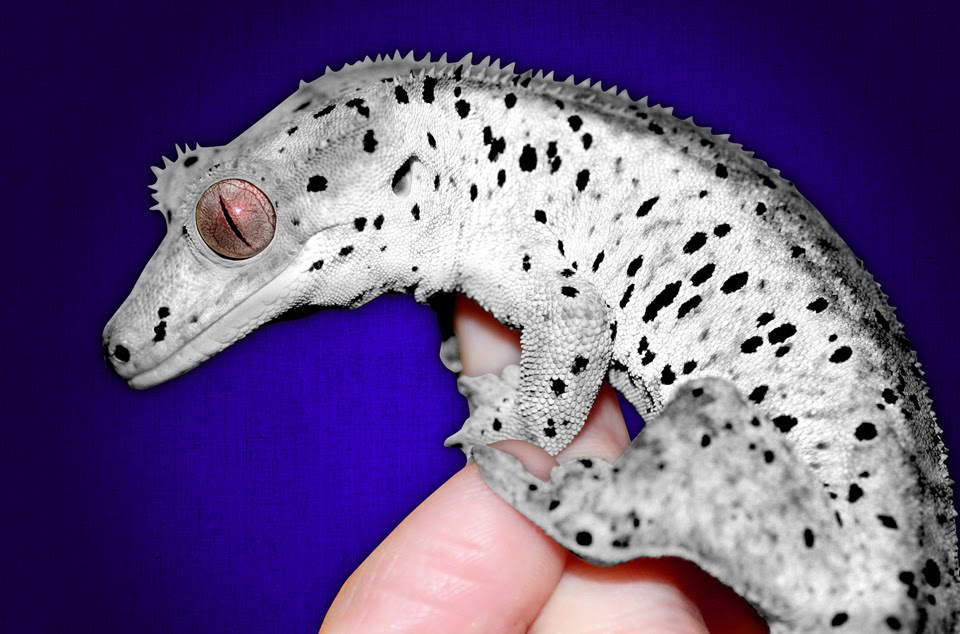 Despite being on the endangered species list, cresties have quite a presence in the exotic pet trade. Enough of them got out before the banhammer came down on their exportation. They now come in a variety of colors, have specialized diets, and are so common that even big box pet stores like Petco sometimes carry them. They are, however, pricey compared to leopard geckos and bearded dragons, especially when one gets into high-end morphs. Said morphs may not even show up until the gecko has matured. The price more than compensates for the amiable nature of these lizards, which is just...D'AWWWW!
Posted by KuroKarasu at 11:10 PM