The deepsea abyss is full of things that you thought only existed in nightmares. There are things with diminished eyes, huge jaws, tentacles, and other traits that make one wonder if R'lyeh was really Atlantis at some point. Maybe H.P. Lovecraft was right about evil gods living at the bottom of the ocean.

For example, this is baby Cthulhu. Or, if you prefer, the Dumbo octopus (genus Grimpoteuthis). Dumbo octopuses live in the abyssal depths of 3-4,000 meters, feeding on worms, bivalves, copepods, and, presumably, human souls. The largest of the Dumbo octopuses are 1.8 meters in length (almost 6 feet) but most of these cephalopods are smaller.

The Dumbo octopus gets its name from the cute earlike flaps on its head. They make it look somewhat like Disney's classic flying elephant as it swims through the water. It also has another method of crawling along the bottom in which it flattens itself into a pancake, which is just as adorable. This other style gives it the name "flapjack octopus." 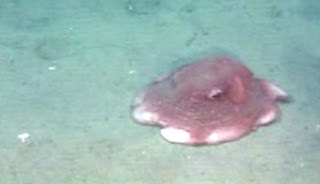 As creatures of the abyss, they do not need the sophisticated camouflage seen in other octopus species. Instead, they employ light tricks similar to those of the vampire squid. They can do anything from making their skin glow to making it completely clear. When you live in a place with so little light, color does not matter nearly as much. They also have no suckers, simply because they do not need them.

Alas, Dumbo octopuses are rare. Some researchers have even called them the rarest of all cephalopods. As abyssal sea creatures and octopuses, they also fare poorly in captivity. They would probably make adorable pets if only we could keep them! Good thing this mini-Cthulhu is one of the least terrifying creatures this week.
Posted by KuroKarasu at 10:42 PM