Sometimes I laugh at Bulbapedia. The people there must only look at names once before adding origin trivia to an entry. A royal/ball python looks nothing like Serperior, even though it has "royal" in the name. I admit that finding what was most likely the true basis for that Pokemon took time, but man oh man, is the knowledge of the general public limited if they take Bulbapedia as god.

(For those of you who are curious, look up a snake called "Baron's Racer." The only reason I know that snake exists is because I found it on kingsnake.com. There's also probably some vine snake in there, but hi, Snivy line!)

That's part of the reason I made this blog: Maybe this is a tiny bit of an overstatement, but in general, it does not look like people are curious enough to look up things for themselves. I could spend hours just Googling things that are mildly intriguing, then making them into blog entries for the general public to enjoy. 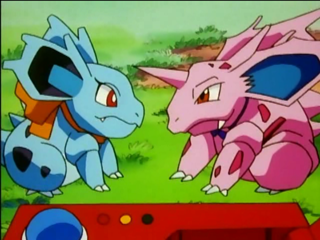 For this entry, let us look at one of the oldest entries in the Pokedex: Nidorino (magenta, male)/Nidorina (blue, female). They are both plain Poison-Types and were the first Pokemon to sport biological sex and gender. (Yes, those two terms are VERY different according to the scientific community.) Most people would be in general agreement that the two Nidoran base forms resemble rodents with extra spikes, but look closely at Nidorina in particular. No extant mammal has a body structure quite like that. Those pointy teeth don't look too rodent-y, either.

Know what, though? An extinct proto-mammal did. Ken Sugimori did not pull Nidorina's design out of nowhere; before the dinosaurs existed, there was a creature called a Diictodon.

Diictodon (a genus, mind) were among the many synapsids (mammal-like reptiles) that lived during the Late Permian (255 million years ago). They had small, tusklike teeth and beaky skulls. So that those of you who only know dinosaurs do not get confused, this was before the Triassic Period, the first period to feature small dinosaurs. Fossils of these not-mammals are found in Asia and Africa, with the great majority of South African fossils being Diictodon. Like the Nidoran line, however, they were only distantly related to mammals when all was said and done.

Diictodon were small, burrowing mammals that would not have stood knee-high to a human. They had short, stocky limbs with five fingers on each hand.  Insofar as fossil records can tell us, they were social animals, but not colonial like prairie dogs. (A few Pokedex entries also mention Nidorina burrowing.) They probably lived, ate, and burrowed like gophers.

Besides the obvious Pokemon analog, Diictodon have had a small presence in popular culture. They were featured in Walking With Monsters as well as Primeval. In Primeval, they were chewing up electrical cables inside a hospital, and the crew managed to send all but two of them back to their own time. The remaining two were kept as pets along with the show's other mascot character, Rex. They were first described as "beaver-things," which makes me wonder why no one has yet to update Bulbapedia with their presence. Really, it's been over ten years since Red and Green and we still haven't realized that the Nido family is full of synapsids?