Week of the Abyss cont'd.:Viperfish.

We've said it before and we'll say it again: If you add "fish" onto almost every word in the English dictionary, there is probably a real creature to match. Some of these matches are justified. Others not so much. The viperfish most certainly is, even though it is not venomous in the least. Just...

...what else WOULD you call this?

Viperfish (genus Chauliodus) range from 1-2 feet (30-60 cm) in length and, yes, are fierce predators. They are native to tropical waters. Their lifespan is uncertain, with speculations ranging from 30-40 years in the wild.  Again, this is the week of the abyss continued; viperfish spend the majority of their time in pitch darkness, but venture up to lighter depths occasionally. Both sharks and dolphins have been known to prey upon viperfish. 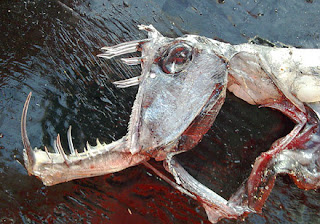 The most striking thing about this fish are, of course, those disproportionately huge teeth. The bottom teeth on this fish are so big that they curve behind the fish's head. Like many abyssal predators, the viperfish uses a light lure to get little fishies curious before immobilizing prey with its long teeth, meaning that the viperfish does not need to swim far or fast to get a meal.

That is not all the light lure is used for. Unlike anglerfish, viperfish have been shown communicating with each other using their natural lamps. Does this show pack hunting - perhaps even intelligent behavior- within the depths of darkness?  Perhaps their name ought to be changed to "raptorfish" if they show coordinated attacks. There is still much to learn.

Although not as well-received as the anglerfish in popular culture, the viperfish is a fairly popular deepsea fish. Artists absolutely love this thing - after all, what says "fierce" better than a mouth with teeth so big that they barely fit? This is probably the most kickass head tattoo I have ever seen - not that I would EVER do something like that myself.