A Wizard Did It/"They Actually Eat That:" Semi-Living Steak and Disembodied Cuisine.

If you are reading this, chances are you know a vegetarian. We aren't being picky, here - anyone who avoids meat of any sort is some type of vegetarian. One of the reasons they will most likely cite in their reasons for vegetarianism is that eating meat is cruel to animals...which, given how most meat is farmed, is perfectly reasonable.

The question is, what's the alternative? It's not like there's some magical product of science that is, in a way, cruelty-free... 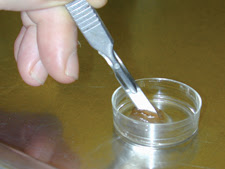 Although not mass-marketed (as far as we know), the Tissue Culture and Art Project has made meat grown in a petri dish several times. The Semi-Living Steak, for example, was a culture of pre-natal lamb meat (don't get me started with "life begins at conception"). The sample was from an animal that had not yet been born; your mileage may vary as to whether this process solves the cruelty issue or not. The meat was grown on an edible polymer. Regardless of how it was grown, meat is meat; insofar as I can tell, the scientists tried to eat it. It was made in Harvard's Tissue Engineering and Organ Fabrication Laboratory, so you know it's good. Nothing says fresh like an Ivy League college!

That steak was just the beginning. The real big, bio-engineered meat project TC&A made was Disembodied Cuisine, an art installation shown in France (2003). Semi-living frog steaks were cultured, then eaten in a "nouvelle cuisine" -style dinner. Live frogs were there to laugh at the French people watching. (The frogs were later released into a botanical garden, presumably still laughing.) The whole thing was designed to spit in France's face; of all the European countries, nobody hates engineered food quite like the French. Small surprise that most people spat it out.

These projects were not just freaky food. Even though the meat itself was cultured, several animal products were used in their formation. There are still victims, but the public does not really know about them. We dream of a victimless utopia in which there is no suffering at all, but then what? The food chain still needs to exist on some level.We hate to say this, but animals suffer plenty in nature, too. This 'meat' is intentionally ironic. Most news crews missed the joke.
Posted by KuroKarasu at 9:26 PM

Email ThisBlogThis!Share to TwitterShare to FacebookShare to Pinterest
Labels: A Wizard Did It, bio-art, humans