Actually, those antelope in the trailer were kind of cool-looking. What were they, anyways?

Well, you're going to laugh. It's called a "bongo." Yes, like the drums. If you can't look at that without cracking up, its scientific name is Tragelaphus eurycerus. It is a nocturnal browser native to many parts of Africa, including Congo, Ghana, and Kenya. Kenya has a very small, unique subspecies of bongo that will come up again later.


Two things stand out about the bongo immediately: that coat and those horns. As in most animals with attractive pelts, the stripes are camouflage. The red pigment rubs off easily - so easily, it is said, that rain running off a bongo's back is stained red. Certainly a neat image, even if it is not true. 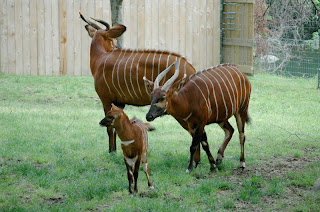 The horns are perhaps the bongo's most outstanding feature. Although looking somewhat similar to those of the eland, bongo horns twist only once and take on a sort of lyre shape. The bongo is actually one of the few species of antelope in which both sexes have rather decorative, spiraling horns. They are still larger in the male, but awesome nonetheless. Better yet, they are both functional and fashionable; a bongo's horns keep it from being caught in vegetation while running.

Oddly, there seems to be a lot of convergent evolution with the okapi going on. Both the okapi and bongo love salt licks. They also have long tongues to handle those licks. On a visual level, they are both red-brown with stripes. There was even an odd delay in discovery by Westerners. They aren't related - okapi are the only extant relatives of the giraffe while antelope are closer to cattle - but they sure evolved a lot of things in common.

As one might expect, some populations of bongo are endangered. The more common, western/lowland bongo is listed as near-threatened. Only the Eastern/mountain bongo from Kenya is in critical condition, with possibly fewer than 100 left in the wild. The usual suspects - poaching and eating - are at work. As if to put salt on the wound, bongo also have a high risk of goitre, i.e. they die from malfunctioning thyroid. Habitat destruction is another big factor in almost every endangered species. This one is no exception. Although  an interesting species of antelope,bonoshould probably be avoided in post-apocalyptic scenarios.
Posted by KuroKarasu at 3:15 PM