"They Actually Eat That:" Hakarl.

I think some of my faith in humanity just died. Why? Because people actually eat toxic, 23-foot-long shark, and it's popular.

No, really. There are people who eat poisonous, polar bear-eating shark. In Iceland, there is a dish called hakarl frequently eaten in winter. It happens to be the national food of Iceland, and is made entirely of Greenland shark. There are different varieties depending on where it comes from. It still comes from the same shark that is about the size of Jaws and eats Christmas mascots as a snack. 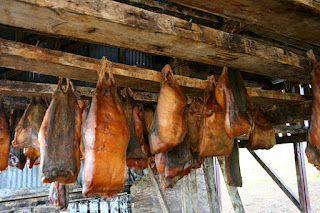 How do they do it? By making the shark rot. They bury it in a pit for a month or five, using heavy rocks to add pressure onto the dead shark. Bacteria take out the toxins in the shark's flesh during that time, making it fit for human consumption. It is then hung up to dry. Note how "delicious" does not come up in that description. Just "fit for human consumption." It's edible, but by no means delicious.

Hakarl is definitely an acquired taste. Most first-timers are advised to hold their noses; like many fermented foods, hakarl tastes (slightly) better than it smells. But don't take my word for it; the video below has testimonials detailing exactly how bad hakarl is. Chef Ramsey himself could not stomach it. No wonder brennivin is consumed afterwards.

To be fair, we can see how someone would want to eat the shark. Traditional Icelandic stuff is made with shark teeth. Just about the only thing they weren't using was the meat. It's still a freaky way to use it; "hey, let's get this bad-tasting shark to decay, and hope the poison's out while the shark's still reeking from bacteria." Yep, great logic.

After Earth would never happen. Humans would decimate every habitat so much that nature would bounce back in strange, unpredictable ways, using exactly none of the cute, fuzzy animals in that movie. The future bat in Primeval is more realistic than that.
Posted by KuroKarasu at 11:56 PM

Email ThisBlogThis!Share to TwitterShare to FacebookShare to Pinterest
Labels: sharks, They Actually Eat That