A lot of religions, and even nonreligious people, like to think that humans are something special. "Closest to God" comes up a lot. Basically, we think very highly of ourselves, even though we have screwed things up - sometimes irreparably. We may build skyscrapers, but whoops, that's more undiscovered species dead!

This week flies in the face of that vain way of thinking. In other words, nature doesn't give a **** about how special humans supposedly are and causes havoc anyways, treating them just like every other animal on the planet. Every so often, there are events that will remind humans that, hey, there's a huge wild world out there, and we're just a small part of it that is slowly decimating the rest. We aren't just talking about predators going on killing sprees; we're talking about craziness like... 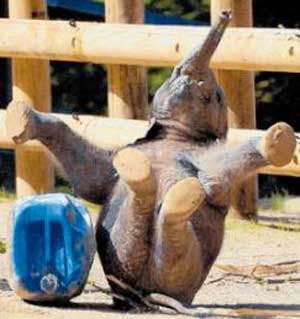 ...drunk elephants. You are reading that statement 100% correctly.

Yes, elephants like drinking. There are plenty of animals that like altering their consciousness on some level. Anybody who has given their cat catnip will tell you that most of them seem to like getting high as a freakin' kite on the stuff. It's kinda rare for animals to like liquor - or, rather, to like liquor and be able to tolerate it. (Please don't give your dog beer; it's not worth risking their health for something funny.)

It turns out that elephants might be able to get drunk without the aid of humans as well. In South Africa, there is a fruit called a "marula" that is not only delicious when ripe, but ferments into potent liquor after being ingested. There is some doubt as to whether elephants in particular get drunk off of a few fruits, but the "documentary" Animals Are Beautiful People at the very least shows us what a drunk elephant might look like so that we can get the eff out of the way.

Basically, elephants are smart, huge animals that like getting wasted. They have figured out that humans have booze, and will go out of their way to get it. Talk about nature being adaptive; these elephants will literally trample right over people to get their fix. They act aggressive and awkward while drunk, and presumably say all the things they want to say but normally wouldn't in front of their elephant buddies.

Sound familiar? Yes? Well, add on the usual human drunkenness to tons of muscle and a 30 mile-per-hour charge. Suddenly, the image of a drunk elephant is not so funny. Multiply it by fifty; elephants can rush their version of a bar en masse, too. It happens a lot wherever humans and elephants happen to coincide. Y'know, as if the elephant had not already been subconsciously linked with liquor.