There seem to be a lot of misconceptions about spiders. For instance, most spiders are not dangerous, and are not malicious arachnids aiming to wipe out humanity. Another, less-crippling misconception is that spiders spit their silk. No- it comes out the other end. 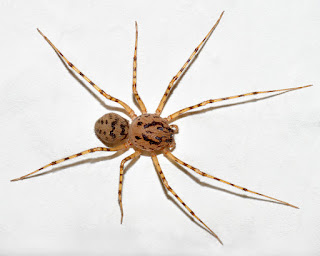 There are, however, a few exceptions to this rule. There is a group of spiders called spitting spiders.  The family of spitting spiders, Scytodes, do just that: spit silk. Oh, and the silk's coated in venom, too. Screw webs - this spider manages to snag prey and envenomate it all at once. The family is found worldwide. At least Spider-Man only shot gunk.

Spitting spiders have silk glands at their head. These are right next to the venom glands, thus allowing for poisonous string. The silk then shoots out of the fangs and onto whatever the spider sees as dinner. Suddenly, Twilight's venom fangs don't seem so implausible.

These spiders are also evil masterminds at what they do. They plot out the trajectory of their spit. Then, like the world's sickest icing, they drizzle the venomous filament over their target by zig-zagging. This lets the spider take down prey much larger than itself, including other spiders!

(Another one caught a brown recluse- one of the few spiders I'll kill on sight. Praise it. PRAAAAIIISE IIIIT!)

Spitting spiders are also surprisingly social. Families will dine on one corpse, live in the same web (which is not used to catch flies), and overall have a fun time together. Some even look after their little spiderlings. On the flipside, however, these spiders are also cannibalistic.
Posted by KuroKarasu at 11:34 PM