They Actually Eat That: Space Food.

Hey, speaking of space, ever wonder what they eat in space? Wonder no more! "They Actually Eat That" will cover what they eat, how they do it, and where you can find some here on Earth. Disclaimer: no aliens were harmed in the making of this cuisine.

First off, imagine how difficult it must be to eat in space. We take gravity for granted. It is very difficult to assemble, say, a salad or hamburger without gravity helping you. In space, there is no gravity; that means food needs to be very, very different. Luckily, since swallowing is all muscle movement, gravity is no issue once the food is actually in your body. It's just assembling the food making sure it's, well, food that's the hard part.

The logic that goes into space food is much the same as that of TV dinners: quick, tasty, most likely dehydrated food that keeps well. There are several foods that meet these criteria by themselves - nuts, cookies, and nutrition bars are fine examples. Even a Chewy bar is a welcome replacement for, well, this: 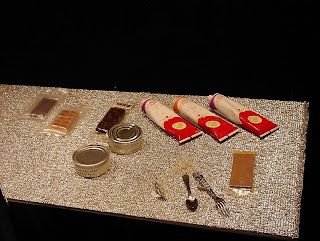 When the space race first started, space food sucked. One Russian journal described it as "toothpaste." The U.S, and other nations had similar reactions. Everybody agreed that it tasted awful and could barely be called food.

Recent efforts and a lot of money have gone into making delectable dishes space-worthy. By no means are we talking actual gourmet banquets; Russian space flights have over 300 options when it comes to food, but fresh food needs to be eaten almost immediately. Anything that leaves crumbs is also right out (careful, they're ruffled!). I don't know how granola bars work with that, but they must have gotten better about crumbs over the years.

Specifically, something called the "retort process" makes many things more viable in space. The idea is similar to canning in that the food inside is cooked at a temperature so high that almost all microbes are eliminated. Camping and military rations use this process as well. We use retort pouches in things like Capri Sun and easy-cook rice. They are not hard to find if you know what to look for. 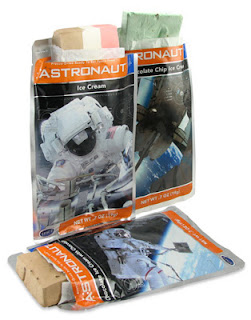 So what about things like "astronaut ice cream?" Yes, in theory, that is space food. Only Apollo 7 actually took ice cream into space. It's still worth a try if you want a taste of what dehydrated food is like. That is part of the astronaut diet, after all.

Email ThisBlogThis!Share to TwitterShare to FacebookShare to Pinterest
Labels: space, They Actually Eat That