So yes. I am slowly starting to have a life outside of this blog. On Friday, I volunteered a good chunk of my day at Green Festival Chicago. Nobody truly awesome was there, yet, but here's what America's most eco-friendly fest looks like before it's set up. Just because stuff isn't completely up doesn't mean it isn't worth writing about.

For those of you unaware, Green Festival is the U.S.'s largest ecologically-friendly festival. It features fair trade items, organic food, and helpful information about why we're so not Earth-friendly right now. More on that in Saturday's entry. For now, know that you get in free if you volunteer, so next time one rolls around take a shift and have fun. Here's what I did and saw: 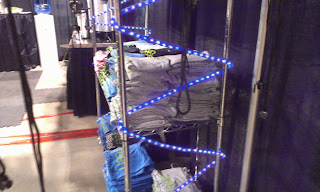 The lights along this thing? My doing. 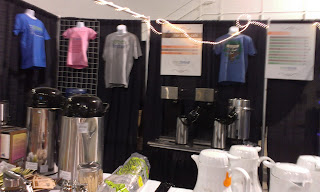 The busts were my doing, too. Now the whole cafe's set up! 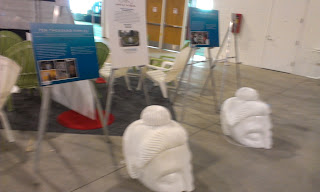 An arrangement of Buddha heads near the theater area. 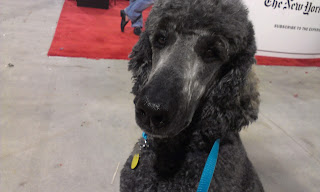 For whatever reason, one of the volunteers brought his dog along. Poodles are a lot fiercer-looking up close than they are on fashion accessories.

A lot of the media booths were starting to get set up on this day, too. While not particularly eco-conscious, it was still awesome to see big shots like CBS and the New York Times. There was a political debate going on while I watched the poodle. 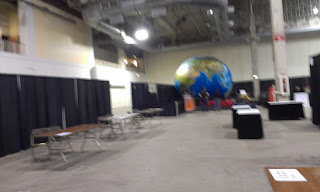 Finishing touch: this globe was a moon bounce.