So, what is a leatherback, anyways? We gathered from the news video that it was an endangered sea turtle. How endangered? Are they really that rare? Let's find out! 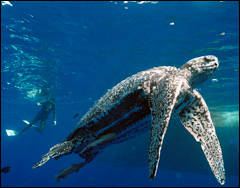 Leatherback sea turtles are unique sea turtles in the genus Dermochelys. They are found worldwide, including around Japan. There are several subpopulations, but are all the same species as far as we know. Finding one in Japan would be unusual, but not unheard of. It's Japan we're talking about; all manner of odd spawns from those islands.

What's in a name? The main thing that sets a leatherback apart from other sea turtles: its lack of a carapace. Leatherbacks are effectively shell-less turtles. They have protrusions called osteoderms and ridges, but do not have a distinct, bony shell.  Their scales also lack beta keratin, which makes them unique among reptiles, and also lack true teeth.In other words, they're almost more torpedo than turtle. Make that a Pokemon: Tortpedo, Water/Steel, high speed for a turtle.

Leatherbacks are such oddball turtles that they are almost living fossils. The other members of this family evolved during the Late Cretaceous - AKA "that time with all the cool dinosaurs." Leatherbacks are the only extant members of their family; the rest of the carapace-less turtles are now extinct. They are also the largest extant turtles, getting up to 7 feet (roughly 2 meters) long. They are large, aerodynamic relics from the days of the dinosaurs. Enjoy. 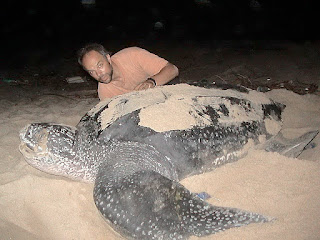 Unfortunately, the news was right: Leatherbacks are indeed endangered. A fair amount of adults are caught by fishing. Although banned by CITES, some leatherbacks are indeed caught and traded (with some hopefully going to research projects - sorry, needed to point that out). A few are caught for meat, but generally, leatherbacks are not good turtle soup. The eggs are treated as a delicacy in Asia, however, which hits populations pretty hard. The only time the turtles are really vulnerable is when they're young, but they get hit hard and fast at that stage in life.

Y'know what? Despite being endangered, these turtles are not pandas. We actually have a very good reason to keep leatherback turtles alive. These things eat jellyfish. A lot of jellyfish. If I did not cover the jellyfish invasion in a previous entry, I should have. Our oceans are being overrun with jellyfish. We need sea turtles before the jellyfish take over the world.
Posted by KuroKarasu at 11:30 PM