I'm going to let the video do the introducing this time:

Now, WTF was that? A company called "Backyard Brains" has released a series of kits related to neurology and cockroaches. Some of them just feature moving cockroach legs with a few wires. The more impressive kits allow one to brainwash cockroaches. No, you do not need a degree of any kind to do this; that's the whole point.

As the site itself puts it, "Backyard Brains enables anyone to be a neuroscientist."  The site has a series of experiments, all of which can be dome with their kits and a few things found in most households. Another famous invention of theirs is the "SpikerBox," which amplifies the sound of neurons to an audible level. It's all pretty cool, and a lot of it will be fuel for future entries.

The "RoboRoach" involves stimulating the antenna nerves of cockroaches so that one can have a brainwashed roach puppet for a few minutes. The whole thing is done via a "backpack" that fills the antennae with fine wire, which in turn tells the cockroach where to move via nerve pulses. You can only tell it to do things like move left and right, but that's still pretty nifty. Same basic idea as RatBot, only less precise and using an icky roach instead of a cute rat. 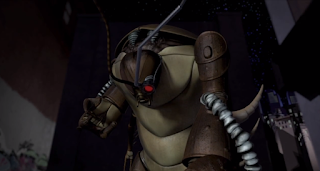 It's not that this idea has not been touched on before. There was an old cartoon involving robot roaches. One also appeared on Teenage Mutant Ninja Turtles, but do note that these RoboRoaches will not become the roachinator above.  Roachbot is not a real cockroach; it still works just as good as RoboRoach for freaking out your friends. Have fun messing with household pests!
Posted by KuroKarasu at 11:27 PM