Most pet-owners in the world are either cat people or dog people. Me, I'm a cat person, and there are some really fascinating cats out there. Whether they are domesticated or not is of only mild relevance. Here's a cat I'd love to take home if red tape were not involved: 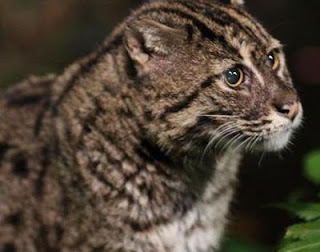 This is a fishing cat. It is one of roughly four species in Prionailurus, a group of small, spotted wildcats found in Asia. The fisher cat has spotty distribution in India and Southeast Asia and is endangered due to human activity. It is primarily found in wetlands and near running water, fishing for, well, fish. Rumor has it, however, that their very varied diet may also include certain carnivores- including dogs. Reminder: this is a small cat.

Doubtless, some cat lovers have noticed that cats like fish, but hate getting their paws wet. The fisher cat has its fish and eats it, too. They first lure fish with a tap of the paw upon the water, then scoop up the unwary little fishy before it knows what hit it. The fishing cat can also swim, sporting waterproof fur and a tail like a rudder. They can also dive for fish if need be. In summary, the fishing cat really loves water, unlike most cats who flinch at getting wet.

Now, here's one major difference between cat and dog people: dog people generally see inbreeding to create insane dog breeds as OK, but frown upon outcrossing with wolves and coyotes; cat people, on the other hand, will outcross with other small cats like crazy in order to create new breeds. The difference is in part genetic; dogs have 39 pairs of chromosomes, leading to an extremely versatile genome and a surprising amount of relatively stable dog breeds. Cats have a smaller genome, with only 19 pairs of chromosomes. (For the curious, humans have 23 pairs, meaning that chromosome count means jack in regards to intelligence.) What this means is that dog breeders have had a very extensive genetic palette to create living artwork over millennia, while the cat people simply do not have that range of genetic color. Cat people have gotten around that by breeding domestic cats to wild felines.

I recall someone once trying to equate comparing dogs with wolves to comparing cats with lions. This is BS for so many reasons, and the argument really deserves a sucker-punch to the gut, but the rule of thumb is that domestic cats can mate with a lot of small cats - including the fisher cat. The resulting hybrid cat is called a "jambi," and it's apparently brand new. Will these fishing cat hybrids be as hydrophilic as their wild counterparts? Who knows.
Posted by KuroKarasu at 11:06 PM