Now that summer's here, or should be, some of you will probably be going on vacation.  That means you'll see touristy crap, and one of the most touristy things at most beach spots are these shark tooth necklaces: 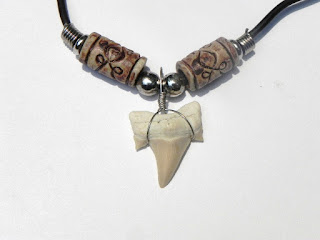 And y'know what? Aside from sharks being in the water and therefore on beaches, shark tooth necklaces have a reason for being,

Sharks are majorly important in many island cultures. Shark teeth are used for arrowheads, cutting tools, and decor. Sharks are so significant that these island cultures have a number of shark deities, some of whom have stories that would be fun to play with if a certain movie shark needs a reboot. When fishing for sharks, some Polynesian tribes use human flesh because darnit, sharks love mana, and human bodies are full of it. In other words, Jaws was onto something.

The good news is that sharks shed their pointy teeth all the time. By buying a shark tooth, you aren't hurting a darn thing unless the people making them are exceptionally cruel to the sharks. The teeth grow back throughout the shark's lifetime. A shark tooth is pretty much the most badass accessory you can get without actually harming an animal. 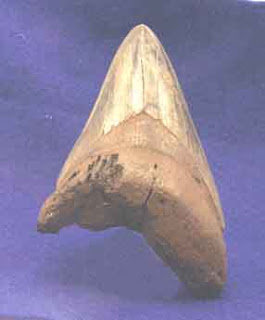 Award for "The Biggest Shark Tooth" naturally goes to Megalodon, one of the biggest sharks to ever live. Its name means "big teeth." Cheap Megalodon teeth can be as low as 15 dollars -  perfect for starting a fossil collection. More hardcore collectors may pay over 2000 USD for a well-preserved tooth in the front of the mouth. Think carefully before buying the tooth. It could take a bite out of your wallet if you don't know your stuff.

Whole rows of fossilized teeth have also been used for bling. Fossilized shark teeth were believed to have come from dragons, and were called "tongue stones." The teeth were believed to be petrified snake/dragon tongues, which sounds a little stupid just to talk about; soft tissue does not fossilize well. Chalk up another "dragons are fish" point for Asia.

Now. esotericism aside? Let's look at some cool sharks.
Posted by KuroKarasu at 9:51 PM