Happy Father's Day! After yesterday's news, it's time for something positive about dads...right?

Unfortunately, in much of the animal world, dads are dicks. I'm not even going to sugar-coat that. They mate, knock up a female, then move on. The vast majority of the time, babies are given no paternal care - and before you say "that's only reptiles blah blah blah," one, both parents leave after the eggs hatch in reptiles, and two, mammals tend to mate and run just as fast.

That said, there are some great animal dads, like this fellow: 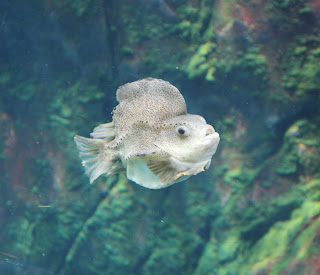 Along with being awesome dads, lumpsuckers probably win the award for "weirdest fish you never heard of." There are 27 species of "lumpsucker, but the titular fish is Cyclopterus lumpus- yes, "lumpus" is apparently a Latin word, now. C. lumpus can be found in the colder, rockier parts of the Atlantic, Pacific, and Arctic Oceans. (Worth noting: the Pacific Spiny Lumpsucker is extremely popular, and merits its own entry.) Their closest relatives are lionfish, which almost everybody who has ever been to an aquarium or exotic pet store has probably seen at least once, and perch, which are a pretty common fish. They look nothing like the scaleless ping-pong balls called lumpsuckers.

Yet, surprisingly, these little weirdos make relatively good dads by fish standards. In lumpsuckers, the male almost does more work than the female. The male makes the nest, for example. After eggs are laid, he guards the brood. Considering lumpsuckers make cheap caviar, it's a good thing someone's guarding those eggs. It helps that his pelvic fin has evolved into a suction cup, leading to the rather amusing image here:

Now, here's why they're called "lumpsuckers." They look like little lumps and have pelvic disc suckers. Yes, lumpsuckers, like some weird Pokemon GameFreak never came up with, have suction cups on the bottom. This thing looks terrifying when seen from beneath, but also makes for some of the cutest fish images on the entire internet. It's similar to the suction that remoras have, but is used for the less badass purpose of clinging to anything that happens to be around while it munches slow-swimming, bottom-dwelling stuff. This thing has evolved the laziness adaptation nerds never could.

Also, guess what? They actually eat that! Apparently lumpfish is not only popular as caviar, but as meat as well. Iceland loves it so much that whole fisheries have been founded on lumpfish.Then again, considering their habit of preserving fish in horrible, maddening ways...we'll let lumpfish slide. We cool, Iceland?
Posted by KuroKarasu at 11:25 PM