OK, let's be honest: I haven't shown off any particularly strange sharks. Sure, it's kinda neat that the nurse shark can sleep and sucks stuff up from the sea bottom, but that's not too odd unless you're a real fish nerd. Hongeohoe? That's a skate, not a shark. Allow me to compensate: 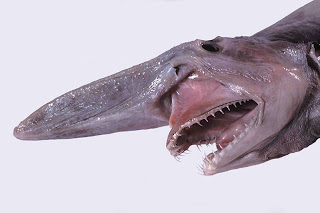 If you thought regular sharks looked nasty, the goblin shark (Mitsukurina owstoni) could win almost any "ugly shark" contest if such a thing existed. It has been around and gone nearly unchanged since Cretaceous, i.e. 125 million years ago. Go figure, it's an abyss-dweller. Unlike the orange roughy, however, these sharks are rarely caught. We presume Dagon would not want us to catch this particular Lovecraftian nightmare regardless.

The goblin shark gets its name because of its funny "nose," which greatly resembles the crowlike noses of Japanese goblins ("tengu"). Much like the bill of a platypus and the hammerhead's titular head, this nose has "ampullae of Lorenzini," which allow the shark to sense electromagnetic waves from the bodies of animals hiding near the bottom. Aesthetically, it just contributes to our fears that something very nasty must be lurking at the bottom of the sea.

Aside from the snout, the goblin shark has one other really bizarre feature: its jaws. Like something out of Alien, the goblin shark can extend its jaws almost to the end of its snout. Words cannot justify how strange this looks. Here's a video instead:

Luckily, this freak is probably one of the laziest sharks on the planet. It's believed to be sluggish, snagging crustaceans, fish, and other deep sea crunchies with its massive alien jaws instead of swimming after them with its stubby fins. It avoids human contact, most of the time, in part because it lives in the dark abyss. You may have noticed that there's a lot of "data deficient" spots on this entry; this is why.

Did I mention that these sharks can get as long as a car? No? Have fun sleeping.
Posted by KuroKarasu at 6:34 PM