Now that summer has hit, various home improvement stores and sections are stocking all sorts of weird plants. Be on the lookout for celosia ("brain flowers"), geops, and a number of other weird plants that one can probably find at one's local nursery. It was almost inevitable that at least one odd, potted plant would wind up on this blog, but I had no idea it would be this odd: 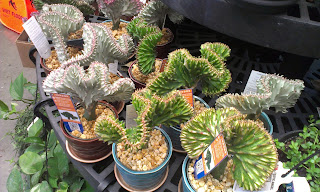 This is a coral cactus. No, there's no scientific name for this oddball. It's 100% created by people. If I had not done glowing marmosets yesterday, I totally would have done this thing; it's a really impressive graft of two completely different plants. Oh, and neither of those plants are cacti, even if they're both still succulents. Both are also almost worth their own entries.

The coral-like crest comes from a plant called Euphorbia lactea, AKA mottled spurge or elkhorn.  Specifically, the coral part comes from a frilly mutation of elkhorn, which is propagated for this exact purpose. Otherwise, elkhorn is another houseplant with some medicinal potential in India. The milky latex on elkhorn is poisonous, as is the entirety of the plant. Keep coral cacti away from children and pets with this in mind.

The stem is from another species of Euphorbia, usually E. neriifolia. It's also called the "Indian spurge tree." Both of these plants have similar climate requirements, so it's no surprise that a graft of the two should be sustainable. It's still impossible to breed them, mind, but you can keep a coral cactus alive like most cacti. Weird? Yes. Difficult? Not really. 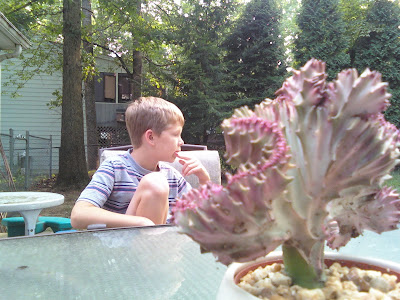 Where can you get this bizarre thing? Wal-Mart. These chimera plants are sold for relatively cheap at the world's most infamous big box store. We would not be surprised if the shop Audrey II came from suddenly started carrying these. If weird plants in one of the largest chains in the world is not a plot for botanical world domination, please tell me what is.
Posted by KuroKarasu at 10:40 PM