As the previous entry hinted, low temperatures means relatively poor biodiversity. This makes a good portion of North America a wasteland compared to say, a rainforest. Does this mean we're completely bereft of unique, amazing creatures? Of course not. Here is just the thing to make you all feel good before Monday: 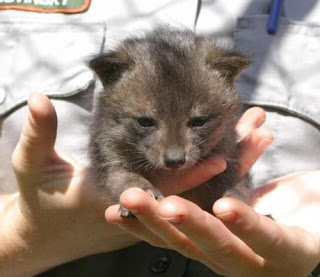 That is a dwarf fox, AKA island fox. It is native to exactly 6 of the 8 Channel Islands in California, with a unique subspecies for every island. Small predators eat small prey, like rodents, crabs, and fish. Interestingly, they can be found active during both day and night, depending on season.

Yes, these foxes are small. They weigh 6.2 pounds, tops. They are frequently smaller than a house cat. Invasive species not withstanding, they are the largest land animals in the Channel Islands. It's the biggest fish in a small pond with very small fish. That's insular dwarfism for you.

Science has proven that wolves have the closest thing in nature to a human family, but dwarf foxes give wolves a run for their money. They stay with one partner all their lives, and their young stay 1-2 years with mommy and daddy. Next Valentine's Day, make your lover a card with dwarf foxes on it. It'll be even cuter if you explain that these foxes are monogamous and keep their kits for a relatively long time. 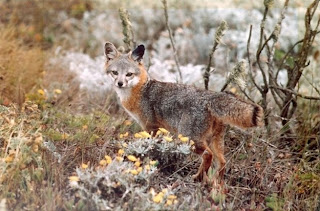 You know what makes these guys even more awesome? They're living proof that humans can restore endangered species if they really try hard enough. I detailed the decimation of the bald eagle roughly a year or two ago; the baldies around the Channel Islands were keeping the foxes from being eaten by golden eagles, who are larger. Like on many islands, feral domesticated animals were also at fault; these were eventually removed via hunting programs. Canine distemper cut one population by 90%. The fox was driven to numbers as low as 15 in the 1990's.

Today? 2,500 dwarf foxes. Conservation efforts did these little furballs wonders. The species is still listed as critical, but that recovery is amazing. That should brighten your day....now get back to work. ;)
Posted by KuroKarasu at 10:14 PM