Whew, back on track! For the record, me collapsing on Monday nights is indeed normal. Luckily, this week promises to be fun. It's a whole week of hogwash, or awesome pigs you never thought you'd meet. 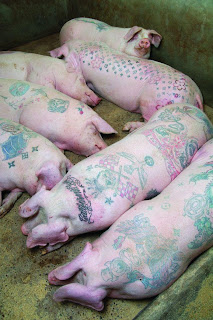 Belgian tattoo artist Wim Delvoye has found new meaning in life: tattooing pigs. He started tattooing pig carcasses while working at a slaughterhouse, then proceeded to tattoo live, sedated pigs in 1994. There is now a massive gallery of tattooed swine. They are found only in Art Farm China and, occasionally, in museums.

So, why pigs? "They grow fast and are so much better to tattoo than fish," says Delvoye. It's also nice that we can see the ink on the pigs because their hairs are so fine. As the artist points out, it is also fascinating to see a tattoo on a young pig blossom into a massive artwork on a full-grown hog. Then, when the pig's time has come to go to the sty in the sky, the tattooed skin remains.

Interested in having a pig as a pet? How about an inked pig? Art Farm does indeed intend to sell its swine, probably for a pretty piggy penny, somewhere down the line. For now, however, it is possible to buy an inked pigskin or stuffed pig. They are also occasionally on display in various art galleries, so be on the lookout for tattooed pigs in a museum near you.

Or not! Some people have amazingly strong reactions to these pigs, calling the inking a violation of animal rights. Delvoye claims that the pigs actually feel less pain than humans on the skin - in part because pigs were wild at one point and aren't known for having flimsy skin in the first place (think "football"). Regardless, the topic of tattooed swine tends to carry mental outrage in its wake. Unless every single protestor has never touched bacon, however, they are probably just as "hypocritical" as the vegetarian artist is; you do not wanna know what goes on at pig farms where the porkers aren't inked.
Posted by KuroKarasu at 8:27 AM