Hey, come to think of it, we've never looked at domestic geese on this blog. This is my fault entirely; there simply hasn't been a goose breed that has gotten my attention. Just looking at domestic geese for one little pic, however, led me to quite a strange goose indeed: 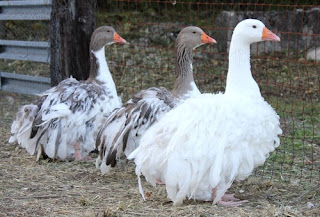 This is a Sebastopol/Danubian goose (Anser anser domesticus).  The breed originated in Ireland from the wild Greylag goose. It only became popular in the 19th century in Europe, and is considered a rare breed. They used to be common everywhere around the Black Sea, and came to England by way of a port in Sebastopol (now in the Ukraine) sometime in the late 1800's. The typical coloration is white with blue eyes and orange feet, but others are available.

The most outstanding trait of the Sebastopol goose is, obviously, the feathers. A similar trait has been found in parakeets. The feathers are so curled that the goose cannot fly. They do, however, make lovely feathers for pillows and quills. Nonetheless, the trait is considered bad for the goose, and it is recommended that curly feathers be kept off the goose's chest so as to avoid wing deformities. (Compare: the taboo against breeding Harlequin Dane x Harlequin, so as to avoid deafness in the puppies.)

Other than the feathers, this goose looks...fairly average. It's frequently crossed with another common goose breed, the Embden, which is one of the more typical "farm" geese. Both are typically bred with a white body and orange legs. It also heavily resembles the Roman goose in color and stature. One trait makes these geese stand out from all the rest, but it's a doozy.

Who knew geese could be so interesting? Perhaps there are more bizarre geese out there waiting to be made into good entries. Hmm...a whole theme week of geese? It's very possible, especially since not many aside from goose enthusiasts will ever see the weird ones. Keep watching!
Posted by KuroKarasu at 11:40 PM