Aww, wolves! The internet either loves or hates wolves, now.  If you love wolves, you're in good company; people will gladly roleplay wolves and/or werewolves with you. Hate them, likely due to the sheer romanticism, and a million users with "wolf" in their names will be down your throat in a torrent of furry fury. Try to look at the wolf without any bias, and you'll still have plenty of friends, but it's like carrying a match around in a room of dynamite. Wolves are cool, and I respect them as much as I do any other animal. 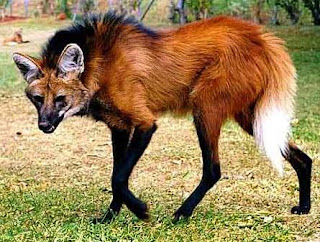 Wait a minute. That is not a wolf. That is a mutant fox.

Actually, it's a maned wolf (Chrysocyon brachyurus). They are only loosely related to the "regular" wolf and slightly closer to the common red fox. Maned wolves can be found over much of South America, where they are the largest wild canid. By the way, they're carnivores, eating small animals such as rabbits, mice, and fish, but roughly half of this canine's diet is vegetable matter. Figure that one out.

The maned wolf is almost a species isolate. Its closest relative, the Falkland Islands wolf, went extinct in the late 1800's. The bush dog, also from South America, is the next best thing. Both of these canids are exotic and interesting enough to merit their own entries. There are plenty of wonderfully weird canids out there, yet most will not think outside foxes, wolves (including the domestic dog), and occasionally coyotes. Canids like the maned wolf are eye-openers to how interesting the family really is.

These wolves do not behave like gray wolves at all. They hunt solo. Those long legs are an adaptation to grasslands, unlike the stocky, cold climate build of the gray wolf.  They have a mane to buff up their profile if threatened. This is not the wolf we know; it's its own creature. Watch someone make a fursona out of it and get slammed by wolfaboos.

Along with looking bizarre, the maned wolf smells funny. It has also been called the "skunk wolf" because the scent is so distinct. Both sexes talk with their urine; a lot of animals talk with urine, but this urine has a very distinct scent. Thanks to a chemical in the urine (likely a pyrozine), the wolf tends to smell like hops, the plant used for beer, or cannabis, AKA weed. In short: These are already party animals, if the smell is any indication. The police have been fooled at least once by the scent.

The maned wolf is considered near-threatened. In the past, it has been suspected as a threat to livestock, particularly chickens. Its eyes were once considered good luck charms; one can only wonder where this idea came from. Measures by the Brazilian government have since alerted people that the wolves are not a threat and should not be hunted for their eyeballs; feral dogs remain a threat. There are a number of good captive breeding programs, so this odd canine will be around for many years to come. They are possible to keep with the proper licenses, but ask yourself: do you want your house to smell like weed and beer?

Posted by KuroKarasu at 2:23 PM