Originally, this entry was going to be dedicated to Hormel. Not only are they probably awful factory farmers, depriving piggies of their natural well-being, but they will put everything and anything ham-related into a can. That includes canned bacon and taquitos. Look it up if you're curious; I'm just going to sigh, say "oh, Hormel," and move on to something even more disgusting than canned bacon. 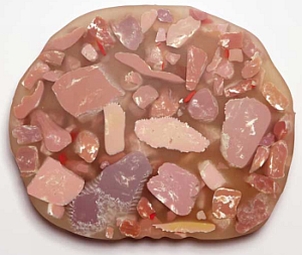 This is commonly known in the U.S. as "head cheese." It is also called "souse" or "brawn" if one simply must make it sound more classy to offset exactly what sort of meat is in question. As one can probably guess, it is made from the head of the pig, sheep, or calf. It has been around since the Middle Ages as a European peasant food. Gee, I wonder why?

Let's think about that for a moment.  There are plenty of meaty parts on an animal's body. The head is not one of them unless the animal in question happens to be a whale or dolphin. Feel your own head for a minute and imagine someone thinking, "hey, there might be meat, there." You'd probably think they were the stupidest, sickest people on earth, right? So, how does that relatively thin skin even remotely qualify as food?

Hey, remember aspic? How about gelatin? Head cheese is usually in a meat gel like that. The meat around the skull naturally gels that way to some degree. Head cheese can look like perfectly OK loaves of mystery meat (see also: meat glue), or it can look like modern food/art gone horribly wrong. Some people think it looks really beautiful; while I can see why they think that, I do not necessarily agree.

Who would do such a thing? Everybody. China does it, every country in Europe does it, and America does it by default. It's a good way to use up parts of a pig that nobody would otherwise eat, even if it happens to be from the 2nd ring of Hell. If a culture eats pigs, it has head cheese in some form. Now enjoy your 4th of July barbeque if you happen to be in the United States. :)
Posted by KuroKarasu at 11:38 PM