Remember when I said I had experience handling reptiles? Well... 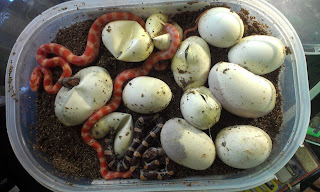 These are all my hatchling corn snakes (Pantherophis guttatus; formerly Elaphe guttata). All of the above eggs hatched except for one, which unfortunately could not get out of its shell. They're rather neat little snakes, and one of the more common ones in the pet trade. It's totally worth doing an entry about them, if only because most people won't know what a corn snake is at a glance.

Corn snakes are mid-sized colubrids from the eastern United States, particularly the Carolinas and Florida. Like many snakes, they eat rodents. They are red, orange, and black, with speckled bellies that give corns Despite being called "red rat snakes," they are actually closely related to kingsnakes - one of the most beneficial snakes around, even according to people who hate snakes. They are also quite beautiful, even without a paintjob like my albino hatchies.

Hey, speaking of paintjobs, you might notice that the wild-type ("normal") babies I hatched don't quite look like the awesome specimen above. That's because corn snakes exhibit something called "ontogenic color change." In laymen's terms, that means that they change color when they get older. It carries over into other morphs (color phases) too, so one really has to be patient to see what the adults will look like. Those drab normal babies will become bright red and orange in no time; that's part of the fun of corn snakes!

While ball python people have scores of morphs to mess with (the list is terrifying), corn snakes have a plethora of hybrids. "Jungle corns" are used to describe any mix between a corn snake and a kingsnake, and there are a lot of kingsnakes to choose from. One of the most common crosses, however, is with Emoryi's rat snake, leading to what are called "creamsicle" corns. It's almost as if, while insane breeding of ball pythons might narrow the gene pool to the point of being undesirable, the corn snake gene pool is expanding by incorporating other species. Dogs and cats, all over again. I can guarantee that we'll make a blue or green corn snake before a blue ball python, in any case. 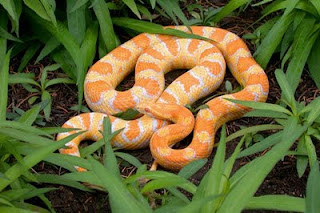 That said, however, I still recommend a ball python for the first-time snake owner. There are several reasons for this, and they all come from personal experience. My first corn snake escaped from me and was never found again; likewise, colubrids are generally harder to catch than constrictors, being able to squeeze into a million tiny places. Especially if you have kids who might forget to lock the cage, balls are a better choice. There are millions of unwanted normal males out there for anyone wanting a first snake. Then, color your world with corns.
Posted by KuroKarasu at 10:59 PM