Bio-art is a developing field. There are, as of right now, no real restraints on what is or is not bio-art. For example, in the class we had, even the use of things like X-ray shots was considered bio-art. Photomanips could be considered bio-art. The 'official' definition extends to art utilizing living tissues. It is, however, slowly gaining a following...and broadening its definition a little. 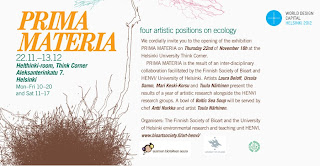 Bio-art, however you choose to define it, has an amazing following in Finland. Finland has its own Bioart Society, in fact. In 2012, the group hosted one of the weirdest galleries that the medium has ever known: Prima Materia - Four Artistic Positions on Ecology. While this definitely has the "bio" side going, some of the time, I kept trying to see the "art."

That is soup stock, sort of like bullion cubes that one can find at the supermarket. The catch? It's made from the water of the Baltic Sea. All the stuff floating around in the sea was condensed into a soup block and rehydrated to be edible. Definitely not the tastiest soup on earth, but watch brains break when people say they've eaten the sea. The soup was served by one of the artists and a professional chef.

The reason I bring this one up is that it struck me as the most artistic (culinarily artistic, at that) of the lot. Making soup stock out of the organic matter in the Baltic Sea sounds like fun, if nothing else. You got to eat the sea if you went to this exhibition. The other three just didn't grab me. Also, I cannot read Finnish, so some of the impact may have been lost.

For the curious, there was at least one other project monitoring the Baltic seawater. Someone else tried a technique of whitening rhubarb that supposedly made for smashing Swedish food, but failed. Another project involved geomanipulation using an odd white shield (albedo) - anyone know more about this? Although some of the photos were really nice, I'm still wondering if anything except the soup qualifies as art. Hmm...Lake Michigan soup...