A Week of Hogwash: Warthogs.

How on Earth could this blog possibly do a week of pigs without covering the warthog (Phacochoerus africanus)? Outside of the wild boar, warthogs are among the most famous of wild swine. I'm amazed this pig wasn't covered already, seeing as I'm a fan of Disney's Lion King. Consider this entry an insight into Pumbaa's secret life.

The team behind the Lion King was not as collectively stupid as some generic "jungle animal" film producers and actually picked a wild pig that lived in Africa. Warthogs are the only pigs adapted to savannah life, being able to graze and eat darn well anything they come across (including insects - the movie got that right, too). They are so named for the "warts" on the sides of their very odd-looking faces, which are at the very least a lot stranger than the wild boar's. No prizes for beauty contests, but impressive nonetheless. There are a few species of warthog spread across the savannah of Africa, making the whole species not threatened.

Wild pigs always have very impressive heads, and warthogs are no exception. The namesake "warts" are globs of fat used for surviving tough weather and added protection when fighting fellow male warthogs. The tusks of a warthog, which curve in crescents over the snout, are sometimes used to make tourist trinkets instead of elephant ivory. The lower pair of tusks is constantly rubbing against the upper pair, whetting them like little daggers all the time. Woe to any predator in the mood for pork chops. 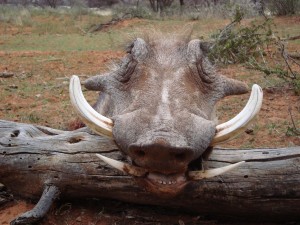 The warthog is more than just a not-so-pretty face. They are also quite adaptable, despite having no protection from extreme heat or cold. A warthog is able to go up for a week without water. Those fatty warts are good if food ever becomes scarce. Speaking of food, a warthog can "kneel" on its front legs to get the lowest little bits of grub. They are pigs that can go without excessive food and water - neat.

As opposed to the downright vicious wild boar, warthogs would rather run than fight. They usually flee into a burrow - either their own or someone else's - and effectively block the entrance with their visages. Four tusks are a pretty good threat. Cowardly? Maybe. Effective? Well, considering that wombats do the same thing with their butts, a head armed with pointy tusks is a step up. Good on you, Pumbaa.