A Week of Hogwash: What Is It With Wild Boars?

If you look through old mythology, you'll notice one common thing: wild boars can be terrifying, awesome creatures. Boars were one of the mascots of Ares; whole war helmets have been made out of boar bits. Freyr, another warlike deity, has a metallic boar, Gullinbursti, as a pet. The Celts acknowledged the male boar's courage and the female boar's generosity and fecundity. They are pretty much universally acknowledged as badasses. As a reminder, they also spawned the domestic pig.

This is what piggies (Sus scrofa) used to look like. Wild boar are native to Europe and Asia, but have since been turned loose in North America and Australia. Unlike the aurochs and wolves, wild boar are not under any threat whatsoever, being extremely fecund. They have also been domesticated since time immemorial, although exactly who decided taming hundreds of pounds of vicious pig was a good idea remains up for debate. They are omnivores and scavengers, just like most domestic pigs are.

Although the official size record for "world's largest pig species" goes to the giant forest hog, some populations of wild boar can outdo them in terms of size. European wild boar can get up to 700 pounds. Again, they also have razor-sharp tusks, charge swiftly, don't back down, and are covered in tough bristles as opposed to the relative hairlessness on domestic swine. As huntercourse.com put it, "boars will circle a human adversary, charge rampantly and attack from behind." Put a few hundred pounds onto that and you have something terrifying. 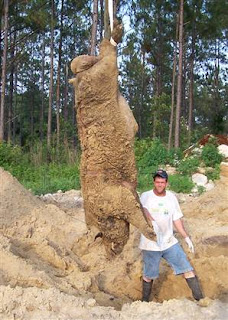 And now the part at least some of you have been waiting for: yes, wild boar hybridize freely with domestic swine. "Hogzilla" is the most famous example of a boar-pig hybrid, weighing 800 pounds and growing roughly 8 feet long. Thus far, this is still the biggest hybrid out there - and likely the biggest pig on record. Feral swine can get massive and retain all their wild behaviors; the pig is far less removed from its wild relative than, say, the dog or cow. You will never see ham the same way again.

The wild boar remains probably the most intimidating wild beast with a domesticated counterpart. A boar, male or female, will fiercely protect its piglets and charge with surprising vigor. The Year of the Pig is frequently changed to Year of the Boar in the wild counterpart's honor. The boar can still be seen on heraldic crests because it is one badass pig.
Posted by KuroKarasu at 6:32 PM