The Human Foot: an Ode to Unintelligent Design.

So, I've seen some people who think the human form is a thing of perfection. Indeed, a lot of people see the human form as beautiful. Most of the art done over the ages has been of humans. We happen to be the most powerful species on the planet right now. How could something actually be wrong?

My answer to them? Just look at the human foot.

The human foot is a marvel of inefficiency. Look at all those segments. Look at those too-flexible joints. There are exactly 26 bones and 33 joints in the human foot - by foot standards, that's a lot.  There is a reason humans are susceptible to sprained ankles, arch pains, and so on. We have not really evolved to walk as well as some things. Beauty is only on the surface; the human skeleton, including the foot, is a right mess- and proof that evolution is a thing.

For starters, humans are plantigrades - the slowest type of terrestrial movement aside from, oh, slugs. The other two common forms of tetrapod movement, digitigrade and unguligrade (paws and hooves, respectively) both have fewer digits and overall less surface area on the ground. The fewer digits you have on the ground, the faster you move. Ungulates walk on their nails; that is why a horse will always be faster than you. Period.

Kangaroos are pretty much the only fast-moving plantigrades in existence. Most of their movement consists of hopping instead of walking. Kangaroos have dealt with being semi-bipedal and plantigrade pretty well; look at the foot above and how similar it is to that of an ostrich, which is probably the most efficient bipedal foot in existence. That is how far behind we are compared to say, birds. Seriously, just look at a (digitigrade) T-Rex foot compared to our messy human foot: 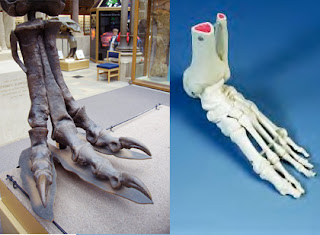 Our feet are messed-up as they are for a reason. Great apes, our closest relatives, have feet very much like hands- meant for grasping, with all five digits in tact and flexible joints. This is not the ideal form for a terrestrial foot, let alone a bipedal foot. We like to think our hands and feet are sufficiently differentiated. In reality, they're not; there's a lot of arboreal ape hand-foot still left in there. Ow.

The reason it isn't gone? Foot fetishists. Or, rather, there was no reason for this horribly inefficient foot to leave. It wasn't really hindering our survival, just being a nuisance. If anything, there is positive sexual selection for feet that look the way they do right now. Especially in cultures where women are covered from the waist down, the ankles and feet are downright attractive. If this attraction was absent and we had, say, predators to flee from, rest assured the foot would be a more beautiful thing.
Posted by KuroKarasu at 9:20 PM