Did you know you might have wild carrots growing in your backyard? It's true. Most flower guides, however, will not mention that the plants are in fact carrots. If you've ever wondered what carrot flowers look like, wonder no more. Anyone who's taken a hike through dry fields or alongside roads  may well have seen this bloom around:

This is Queen Anne's lace, AKA the wild carrot (Daucus carota). It originated in Europe, but has since become wild in the United States and Australia. It is relatively easy to identify by its many clusters of small, white flowers in a lacy, overturned umbrella. It's largely considered a weed, but more on that later.

The plant supposedly gets its name from one or both of two Queen Annes: one from Denmark, who was in turn the mother of Anne, Queen of Britain. Legend has it that the red flower in the center is from an accidental prick of the needle when Queen Anne was weaving said lace. Of course, its real purpose is to attract insects, but that's not nearly as fascinating, is it?

Although a close relative of the domestic carrot, the wild carrot can be considered either helpful or harmful. Mostly, it is a wild weed perfectly capable of consuming one's garden. However, certain plants such as tomatoes may actually grow better in the presence of Queen Anne's lace. Queen Anne's lace is also used for several medicinal purposes, including general skin issues (burns and the like) and, surprisingly, anything relating to menstruation. If carrots can cure that time of the month and/or be a contraceptive, I'm on board. 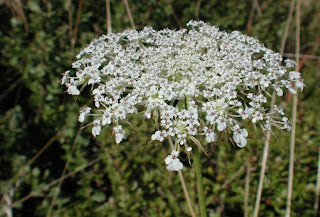 That said, it is not advised that you attempt to eat wild Queen Anne's lace for a number of reasons. The first is that it strongly resembles poison hemlock, so a misidentification could be lethal. The other is that wild carrot roots are not nearly as tasty as the carrots one finds in the supermarket. The root becomes woody after a very short amount of time, and even then, there isn't much there to eat. It'll save you
Posted by KuroKarasu at 11:41 PM