Happy New Year's, everyone! Or, well, it will be 2011 tomorrow if it isn't where you are already. In any case, have some fireworks: 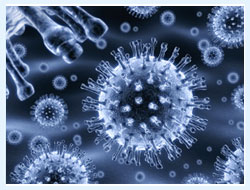 Surprisingly pretty, aren't they? A lot of viruses, deadly though they may be, look like they would make good lighting fixtures once seen individually. Astroviruses are so named because they have little stars (with either 5 or 6 points) covering the surfaces of their shells. There are a number of them between several bird and mammal species. 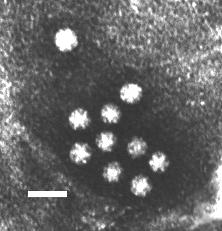 Astroviruses are the viruses that ruin your holidays - the most common symptom of an astrovirus is, in a word, stomach flu.There are a number of other things that can cause stomach flu; the sort spread by astroviruses is only the 4th most common, and is usually spread in childcare facilities and military living arrangements. Otherwise, they're so light a group that Wikipedia has their species names in English, not Latin.

Happy holidays, all! Keep your hands clean to prevent the spread of firework viruses!

(Does anyone know the name of this one bug with 'fireworks' shooting out of its ass? I tried to find it and failed. Short improv entry was short.)
Posted by KuroKarasu at 10:31 PM