There are a million parasitic bugs in the world. They are fascinating, mortifying creatures that make us not want to live a bug's life. For many cases of parasitism, we can sympathize; after all, humans can have worms inside them, too. Other parasites can be, well...twisted.

The handsome fellow up there is from a family of insects known as Strepsipterans. If one just happened to encounter an insect like that, one would probably think that it was just some sort of fly. Strepsipterans are, however, very, very different from flies...as well as most other insects.

Strepsipteran parasites all start life as highly mobile larvae. The grubs have little legs (triungulate) to help them better seek out a host, usually a wasp or bee in North American species. They enter in through a host's foot, abdomen, or eggs, and then proceed to lead horribly sexually-segregated lives that would make any feminist scream bloody murder.


The family name "Strepsiptera" means "twisted wing," and no name could be more apt to describe the adult males of the species. Strepsipteran males have hind wings like giant fans; when at rest, they are twisted over the male's back, hence the name. 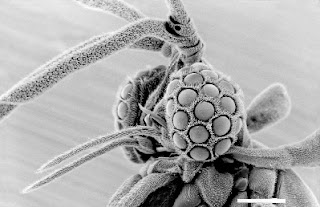 Although the wings are pretty darn weird, more people are interested in the male's hairy, blackberry-esque eyeballs. Most insects have multifaceted compound eyes, but the eyes on these parasites are composed of dozens of individually-functional eyes. This has only been seen in trilobites; no other extant animal has eyes like these twisted males.


The females, although less mind-bogglingly bizarre, are still strange in their own right. Females never leave their hosts; they remain without wings or legs in between the plates of their host's exoskeleton. They have only their faces sticking out of the host's plated armor, so the male has to pierce her neck with his penis. Don't look so disgusted; quite a few insects (including bed bugs) do this. It does, however, look a lot like inter-species sex gone horribly, horribly wrong.

The closest relatives of these trippy parasites are still up for debate. They were originally thought to be related to some families of parasitic beetle (which will get their own entries some time), but Diptera (common, two-winged flies) and Lepidoptera (butterflies and moths) have come up as well. This family is a puzzle, even with genetic research helping to piece it together. Chalk it up with Hallucigenia as "we don't know what this is."
Posted by KuroKarasu at 8:39 PM