So I went to the reptile store yesterday. A young lady was there with her boyfriend; she was one of those people that was scared of snakes, even if they looked like cotton candy. I can't really pinpoint what freaks people out about them; it could be the way they move, that a good chunk of them are poisonous, their forked tongues, or that, in Western culture, they are pretty much cemented as avatars of Satan. Do snakes really need any more fodder to be considered "evil?" 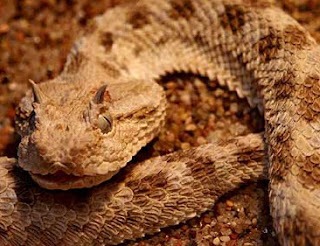 No, somebody did not just go in there and PhotoShop horns on. The whole genus Cerastes (as well as Pseudocerastes) sports small, devilish horns above its eyes. The horns of Cerastes are really just one scale; Pseudocerastes horns contain many scales. Horned vipers are generally spread across Africa and the Middle East with plenty of mythology to go with the territory. Before you ask, yes, they range all the way into Israel.

The Egyptians used the horned viper as one of their hieroglyphs. The "f" sound as in their word "fy" for viper (which is onomatopoeic of the viper's hissing and scale-rustling) and as a possessive. (Using a snake as a possessive has its own interesting implications.) Every snake was treated as some form of divine manifestation in Egypt, and they had very good records on how to treat snakebite. Desert horned vipers (Cerastes cerastes) were among the animals that they mummified, even though they were also among the most feared snakes in the area. They certainly look the part.

The generic name "cerastes" comes from a horned, spineless serpent in Greek mythology. According to the Greeks (and, later, DaVinci) the serpent possessed either four horns or the horns of a ram. It would lie in the sand with only these horns exposed, tricking other animals into thinking that there were worms poking up from beneath the sand. Then, the flexible snake would strike.

The real snake is far less imposing. Although the horned face, spadelike head, and cat's-eye pupils all look legitimately intimidating, those images are close-ups of a very small snake. The longest member of Cerastes gets less than 3 feet long (less than a mater for metric people). These are not roaring dragons from the bowels of Hell; they are small, secretive ambush predators that only have a chance of killing you.

Cerastes sounds like one of the better beginner hots. When asked about how potent the Sahara Sand Viper's venom was, a user called Viperkeeper on YouTube responded "ruin your week.""Ruin your week" is a LOT better than "ruin your life," which is what most other venomous snakes will do to you. (I do not condone handling ANY venomous snakes. Hooks, not hands!) Most of the symptoms of horned viper bites involve the circulatory system, including the rather nasty side-effect of urinating some red blood cells. Again, this is not considered lethal; a rattlesnake bite is much worse. Venom aside, desert animals are usually very easy to keep, and horned vipers are no exception.

Plus, they've made awesome monsters for centuries. Prince of Persia recently had a few 'trained' horned vipers. Snakes do not do that; they have no social structure to speak of, do not come when called, and certainly will not swallow knives for their masters. Don't try it at home, kids!
Posted by KuroKarasu at 12:27 PM