There are usually one of two reactions to beetles: If it is a ladybug, people tend to go "awww" and put it on umbrellas, purses, you name it; if it is not a ladybug, the usual reaction is to kill it with fire. That's a shame; there are a fair amount of beautiful, interesting beetles that deserve the same love that ladybugs get.

This is EXACTLY what it looks like: A bug with sh*t on its back.

"Wait a minute, Kuro. This little worm is among the more lovable beetles?"

Yes, yes it is. That is the larva of a tortoise beetle, a blanket term for beetles of the family Cassidae (or Hispinae). There has been a lot of debate on the exact taxonomy of these beetles, but they are definitely related to leaf beetles. They eat plants all their lives, so if you wish to find one (which you very well might when all is said and done), look for leaves that have been chewed. They are especially fond of bindweed. Various species of this family have been found from North America to Vietnam.

Tortoise beetle larvae have a very interesting (i.e. unpleasant) way of protecting themselves: Instead of discarding their waste, they wear it and all that sticks to it as armor. Not many predators are willing to eat that, no matter how common corprophagy is in non-human animals.

But wait. It gets better. 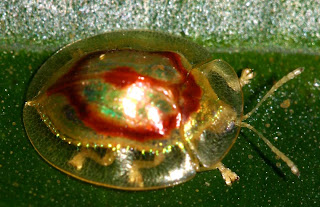 This little insect undergoes a dramatic metamorphosis from a crap-wearing bug to one of the single most beautiful beetles in the world. (Technically, there are several dozen species of tortoise beetle, but all ladybugs look alike to most people, too.) The adult form has a transparent shell that makes it look like a glass button: 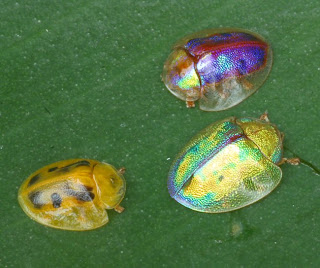 Or a piece of gold:

Or even a ladybug:

As one might expect, these beetles are often used in jewelry (even with most of their iridescence lost). Do want; not that I want to see these beetles dead, but with elytra like that, wow.
Posted by KuroKarasu at 10:49 PM