"They Actually Eat That:" Ortolan.

The French have some really weird cuisine. Most of it tastes good (y'know, unlike 'cuisine' in America, which is a death sentence if one can taste trans fats), but really, some of the things that France considers cuisine -as well as how said things are prepared- are enough to keep people off of meat and/or join PETA.

Ortolan's name does not immediately clue one in on what it is. That is, of course, unless one is French; the word "ortolan," deriving from the Latin word for "garden" ("hortus," see "horticulture") can refer to many species of bunting, a type of songbird similar to (but distinct from) finches.  The particular species used for Ortolan is Emberiza hortulana, simply called the "Ortolan" or "Ortolan Bunting."

Take off an Ortolan's feathers and you get this: 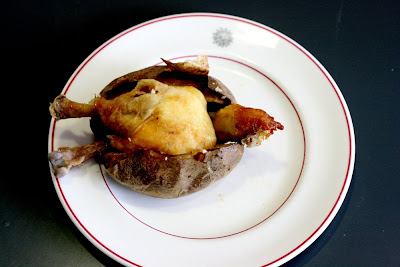 Or, rather, catch the wild bird in a net, fatten it up overnight, then drown it in brandy and bake it for 5 minutes. Add a potato. Then you get that. The taste is often described as being a little gamey, like quail, but with bones and blood to go along with it. Ortolan is so good that the bird that is killed for it is protected by law due to overhunting and cannot be legally sold anywhere in Europe.


What? You think I'm just an American raging at Ortolan because it's different? Even the BBC - the British Broadcasting Company - had a complaint with this one. Argue all you like that it's just because they're British, too; part of the ritual of eating Ortolan involves covering one's face with a napkin to hide one's disgrace from God (among other explanations, including "nobody wants to see you eat a songbird"). You can't say that a dish is sane when God disapproves.

I can't see what you're doing beneath that napkin!

This is the first time that one of my reviewed dishes has been considered unholy.  Illegal, sure; cruel, yes (factory farming is a LOT worse than Ortolan, as are lobster and ikizukuri); possibly an invention of Satan? That's a first. You don't have to be religious to agree with this one.
Posted by KuroKarasu at 10:42 PM