Does anyone else remember the children's book series Where's Waldo? If not, the goal was to find a guy named Waldo (or Wally, depending on your region) in a crowd. He usually blended in pretty well either the crowd or other red-and-white things in the picture. The challenge was to find Waldo and/or his friends in the extremely-crowded image.

Now for a twist on that - find the seahorse: 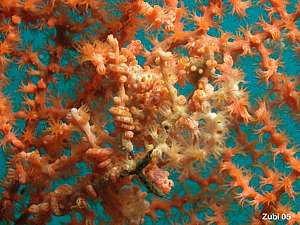 OK, now for an easier one: 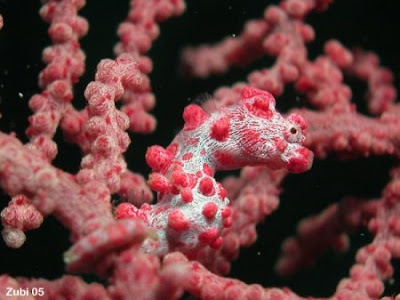 That adorable little sprite, dressed in red and white (or very light blue-gray) for the holidays, is a pygmy seahorse (Hippocampus bargibanti). They are native to the coral reefs around Japan, Australia, Indonesia and New Caledonia. There are two subspecies, each specifically evolved to blend in closely with a particular type of gorgonian coral (AKA sea fans). Their camouflage is both super-effective and adorable.

If you missed the seahorse more than once in the images above, you are not alone. This tiny seahorse was unknown to science for a looong time. They were first discovered by pure accident when their coral host was brought into an aquarium.


Pygmy seahorses are one of the smallest vertebrates alive. From head to twisty tail, they only stretch 2.4 cm - approximately one inch in America. (For those curious, the smallest vertebrate is a small relative of carps and minnows, also from Indonesia.) They are so small that there are probably many more subspecies and species waiting to be discovered.  Many species of pygmy seahorse have only been discovered within the last ten years. The Waldo of all seahorses will have us looking for a very long time.

(Happy Christmas Eve! Hope you all get lots of good presents tomorrow!)

Posted by KuroKarasu at 9:32 PM