Most of my family is Polish. My friend's family also has Polish (among other things), so during our Christmas lunch at a rather fancy German place called the Berghoff, Polish cuisine came up in conversation. There were two things I had never heard of, but were supposedly obligatory for being truly Polish: A certain type of sausage made of all the pig parts that nobody wanted to eat and a soup called "czarnina."

In a Dutch cup, for some reason.

Czarnina is the only Polish dish that has ever gotten my interest for one simple reason: S'blood.


They Actually Eat That?!

Czarnina is soup made from a duck's blood. Seasonings and fruity flavoring are usually added to make it taste less like a fresh wound and more like actual food. Noodles, dumplings, and pieces of fruit are often thrown in as well.

The Poles are not the only ones with duck's blood soup. Sweden, Vietnam and China all have similar dishes. There are also various sorts of blood puddings, sausages, and even blood tofu (i.e. a one-inch-deep pan of blood allowed to congeal, then cut into rectangular slices). 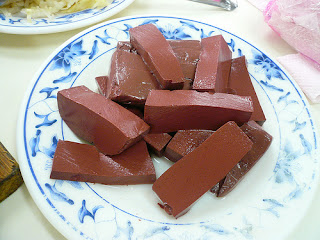 The blood substitute of choice for vegetarian vampires everywhere.

The acceptance of blood-based foods depends largely on culture. In Poland, for example, duck's blood soup is a plot device in one of their epics. It is also typically served to young men if his girlfriend's parents didn't like him. REJECTED never seemed so sanguine.
Posted by KuroKarasu at 11:55 PM